Gujarat assembly election 2022: The turnout was lower than the 66.75 per cent recorded in the first phase in the same 89 constituencies in the 2017 state elections 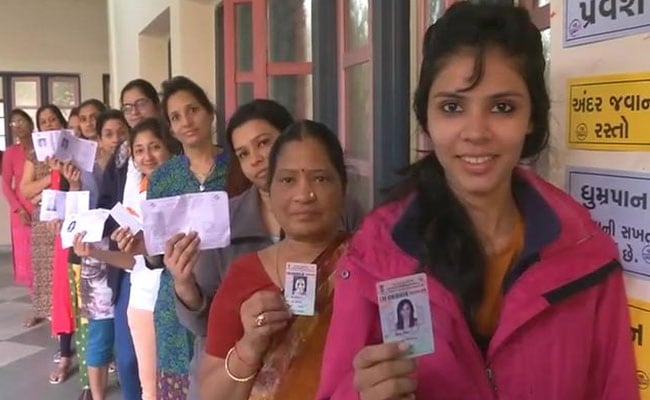 An average voter turnout of 63.31 per cent was recorded in the first phase of the Gujarat Assembly elections in 89 seats, the Election Commission said on Friday while announcing final figures.

The turnout was lower than the 66.75 per cent recorded in the first phase in the same 89 constituencies in the 2017 state elections.

Polling for the first phase in 19 districts of Saurashtra, Kutch and south Gujarat was held on Thursday. The fate of 788 candidates was sealed in Electronic Voting Machines.

Dediapada in Narmada district recorded the highest 82.71 per cent voting, followed by Kaprada in Valsad district which had a turnout of 79.57 per cent.

Gandhidham seat in Kutch district recorded the lowest turnout of 47.86 per cent.

A special drive had been carried out by the office of the state Chief Electoral Officer P Bharathi to encourage voters to exercise their franchise.

The second phase of 2022 elections for remaining 93 seats with 833 candidates in the fray will be held on December 5, and votes will be counted on December 8.

In the 2017 election, of the same 89 seats which went to polls in the first phase, the Bharatiya Janata Party (BJP) had won 48, Congress 40, while one seat was bagged by an independent.

The BJP, which has ruled the state for 27 years, is seeking to win a straight seventh term. If it succeeds, it will equal the record of the Left Front government which had ruled in West Bengal for seven consecutive terms till 2011.

Besides its traditional foe the Congress, the BJP this time is facing a new adversary in the form of Aam Aadmi Party (AAP) which campaigned aggressively.

Besides, 36 other parties including the Bahujan Samaj Party (BSP), Samajwadi Party (SP), Communist Party of India-Marxist (CPI-M) and Bharatiya Tribal Party (BTP) are also in the fray.

In the first phase, three villages boycotted the election: Dhrafa in Jamnagar district, Samot in Narmada and Kesar in Bharuch district.

During the voting, 89 ballot units, 82 control units and 238 Voter Verifiable Paper Audit Trail (VVPATs) were replaced due to technical glitches.

As many as 104 complaints were received, including six regarding malfunctioning of EVMs, two about bogus voting, 30 regarding law and order issues, 36 regarding violation of the Model Code of Conduct and 30 complaints about issues like slow voting, bogus voting and power cuts, the EC said.

At Dhrafa village, the voters were apparently irked as there were no separate polling booths for men and women.

In Kesar village, the locals boycotted the election to protest lack of basic facilities, the EC release said.

Samot village in Dediapada constituency of Narmada district with a total 1,625 voters boycotted the election over the issue of regularisation of farm land in the village.