9 Dead In Violence Across Uttar Pradesh During Citizenship Act Protests

CAA Protest: However, Uttar Pradesh Police insisted that they had not fired even a single bullet at protesters. 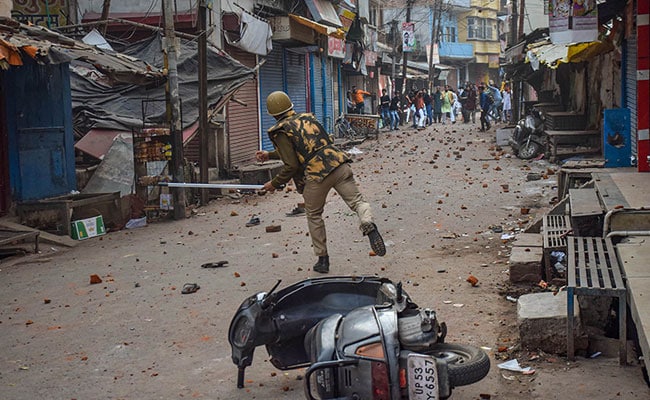 CAA News: A policeman throws a stone at protesters during a demonstration in Gorakhpur.

Nine protesters were killed in clashes that erupted across Uttar Pradesh over the Citizenship Amendment Act on Friday, the state police confirmed. This has taken the total number of protest-related deaths in the state to eleven so far. However, Uttar Pradesh Director General of Police OP Singh claimed that none of the protesters were killed in police firing. "We did not shoot even a single bullet," he said, even as another officer claimed that "if any firing happened, it was from the protesters' side".

The violence came despite strict security measures enforced ahead of the prayers.

The Citizenship Amendment Act aims to make it easier for non-Muslim migrants from Bangladesh, Afghanistan and Pakistan to become Indian nationals. While protesters in the Northeast claim that it will nullify the Assam Accord of 1985 and open the floodgates for illegal migrants into the region, those in other parts of the country term it as a "discriminatory" and "unconstitutional" law that seeks to undermine India's secular credentials.

A protester had died in violence that broke out in Lucknow amid a nationwide agitation against the controversial law on Thursday. "We have got some evidence that indicate the hand of outsiders. We are investigating them. Mobile phones and call details of those identified are being checked," OP Singh had said then, claiming that the "trouble-makers" came from places like Barabanki and Bahraich.

Violence also erupted in the national capital on Friday, with protesters clashing with police personnel near Delhi Gate.