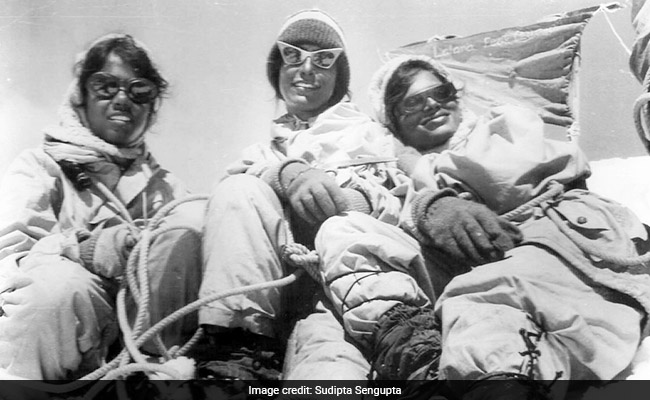 The three young mountaineers from Kolkata summited the peak on August 21, 1970

Fifty years ago, three women from Kolkata - Sujaya Guha, Sudipta Sengupta and Kamala Saha - reached the summit of a 20,130-foot peak in the Lahaul region of Himachal Pradesh. This had never been climbed before.

They named the peak 'Lalana', which means 'woman' in Bengali.

On August 26, 1970, five days after they summited 'Lalana', Ms Guha and Ms Saha were dead, swept away by the frigid, fast-flowing waters of a high-altitude stream fed by five glaciers. Another member of the team, Shefali Chakraborty, was lucky - she got stuck on a boulder and managed to walk away. Ms Guha's body was eventually found but Kamala was lost forever.

Triumph had given way to tragedy.

"It was a nightmarish experience," says 74 year-old Sudipta Sengupta, the only surviving summiteer from the expedition. "We were all preparing to return home. We were headed to Batal to send the first telegram to let the world know that we had achieved this." The team had broken into two. "We had hoped that the two would reach Batal. I was given the charge of joining them the next day after packing up the base camp," says Ms Sengupta. "We were sitting outside in the dark, hoping for the mules to come. Suddenly one of the porters arrived and told us, 'Leader didi mar gayi'. He was breathless and said he couldn't find the others. We were stunned." 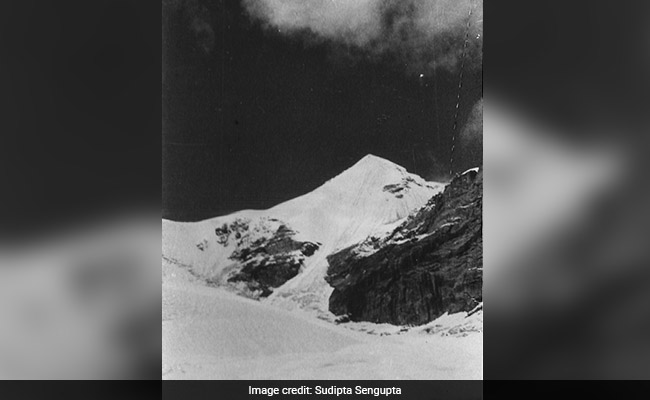 'Lalana' has never been successfully summited since.

50 years later, no one has managed to summit 'Lalana'. The last attempt, in 2018, had to be called off. Multiple crevasses along the route, a lengthy route requiring rope-fixing and heavy stores meant that this attempt had to be called off with the climbers returning to the Base Camp.

"In 2018, an attempt was made," says Ms Sengupta. "They couldn't cross beyond 18,000 feet because of the crevasses. They said they wanted to come back to make another attempt."

On August 5, 1970, the all-women expedition with six climbers and high-altitude porters set off from Manali where they had spent nearly a week sorting out their equipment, rations and accessories. They crossed the Rohtang Pass, trekked up to 10,800 feet to reach Chhota Dara at 12,100 feet. After crossing the Chandra River, they set up base camp at 12,700 feet, located Northeast of the Bara Shigri glacier. The entire expedition team that attempted to climb 'Lalana' in 1970.

Despite weather turning worse, the team decided to move on to their Advance Base Camps with the final camp located at an altitude of 13,700 feet.

"Because of the poor weather and high winds, we found ourselves in a situation where boulders seemed to be falling all night."

On Independence Day, 1970, the porters managed to carry up supplies to Camp 1 at a height of 16,100 feet following which the stage was set for the final attempt, one that would see the climbers encounter near vertical walls of ice which they had to traverse along a 70 degree slope by cutting steps into the ice. 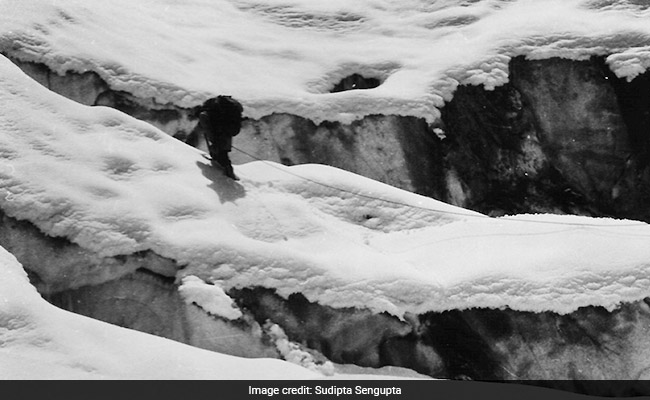 The crevasses leading up to 'Lalana' peak.

On August 18, as they set out from Camp 1 to establish Camp 2, the six climbers found the route ahead of them criss-crossed with crevasses, the smaller ones covered with snow and extremely treacherous.

"If snow falls on the wider crevasses, it goes in and we can detect their presence. However, the small ones are always covered by layers of soft snow, particularly if the weather is bad. Sometimes, it is impossible to know where they are. These can be lethal."

Setting up Camp 2 at a height of 17,000 feet proved to be daunting. Finding no suitable stop, the team set up the camp in between two large crevasses, within a corridor which was barely adequate for the width of a two-person tent. The site itself was at the edge of a rock wall. "We pitched two tents facing each other and dared no emerge out of them without tying up ourselves," wrote Ms Sengupta in her report of the expedition.

By August 19, it became clear that a decision needed to be taken. Determined to succeed despite the overwhelming odds, the team set out to set up Camp 3 at 18,000 feet by the side of a big ice scarp. 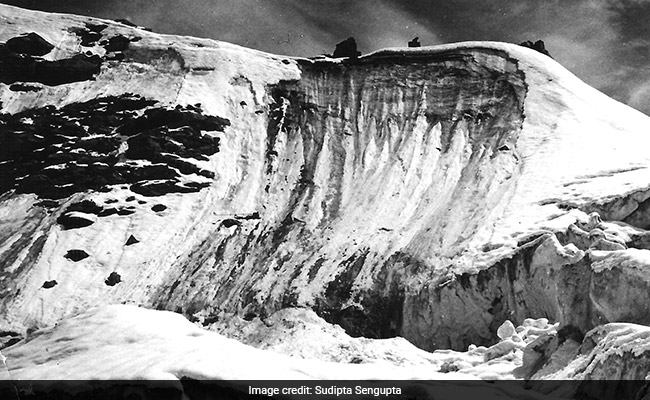 Difficult, near vertical icy-walls had to be climbed to get to 'Lalana'.

August 19 was also Ms Sengupta's moment of truth - death seemed a distinct possibility. "I broke into a snow-covered crevasse," she wrote in the mountaineering journal, Himavanta. "Dangling on the rope I could guess rather than see the bottomless pit, dark and menacing, staring up at me." But Ms Sengupta was lucky. "Fortunately, my rucksack got stuck and I was pulled up by Sujayadi and Gyalchhen (one of the porters)."

On August 20, 1970, the final camp site before the assault on the peak was struck by heavy winds. It started snowing heavily. The climbers stayed in their tents getting set for their now or never moment.

The climb was arduous - almost impossible at stages. "At 5:30 am, we were confronted with a steep ice face with exposed hard ice, which was also an avalanche point." The climbers were now at 18,373 feet, negotiating rocks and ice on a near vertical rock-face.

The weather, fortunately, was good - neither too sunny nor very cloudy. 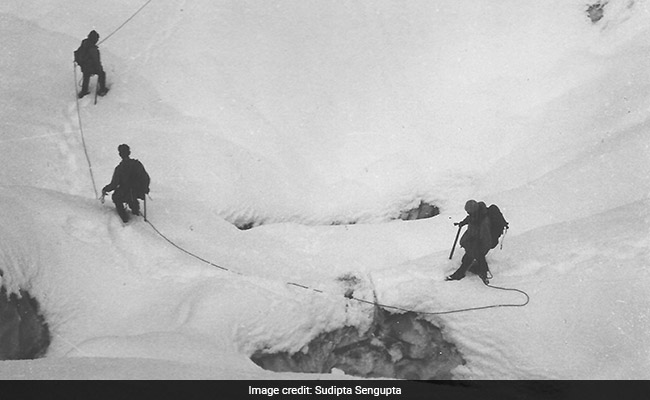 The climbers had five set of 200-feet-long ropes on them.

With barely 500 feet left for the summit, disaster almost struck, once again. The climbers had used up all five lengths of fixed rope with them. Would this mean the end of the expedition, with victory seeming well within reach?

"We had five ropes. Each one was 200 feet long. The path was so steep and the route was so bad, that we couldn't go without fixed rope. We had to eventually depend on the rope that was connected to the three of us for support. And we somehow kept progressing."

"It was out of the world. From the top, you could see 360 degrees. It was beautiful. We could see all the glaciers coming down as frozen rivers, blue skies," says Ms Sengupta. "It is a pity I have no colour pictures. We sat there for one-and-a-half hours. We just looked at everything, stunned as we were and taking in everything around us." The journey down from 'Lalana' was as tough as the climb.

After 90 momentous minutes on the summit of the peak that they had named, it was time to get back - the journey down would be as tough as the climb to the top.

"On 22 August, Sujayadi sank into a crevasse while on her way to Camp 2." Fortunately she was attached by a rope and was promptly rescued. Little did any members of the expedition imagine, for a moment, that Ms Guha would be dead just a day later.

Just seven miles from their base camp on August 23, the team members who were to proceed to Batal after splitting up had a choice to make - would they risk crossing a high-altitude rivulet. The two porters had managed with great difficulty. Ms Guha, the team leader, decided to go ahead, leading from the front.

"Hand-in-hand, they stepped into the water, Sujayadi leading as usual, Kamala behind her and Shefali at the end."

"The only ice-axe which Shefali was carrying slipped from her hands. She herself slipped immediately thereafter and was carried away by the swirling waters." Ms Chakraborty recovered, finding herself stuck between boulders close to the bank about 50 feet from where she had slipped. She pulled herself out of the water, searching desperately for the other two women.

They were nowhere to be found.

The high-altitude porters, who had crossed, spotted a windproof jacket on the surface of the water. They rushed to the spot where, tragically, they found the body of Sujaya Guha, the team-leader.

The rest of the team was still at the base camp and word of the disaster reached them in the evening.

Sujaya Guha was cremated in her beloved mountains at Stindri, about three kilometres beyond Keylang. Her post-mortem report said she died of immediate heart-failure, possibly due to the shock of falling into the frigid waters. Sudipta Sengupta is the only surviving summiteer from the expedition.

Asked how she decided to become a mountaineer more than 50 years back, Ms Sengupta says, "Those days, we never heard of rock-climbing." The uncle of a friend headed the Himalayan association and the first rock-climbing courses started in Purulia."

Ms Sengupta, the deputy leader of the expedition, is the only surviving summiteer. She eventually became a structural geologist and was among the first two women scientists to join the third Indian Antarctic Expedition in 1983. Her Bengali book 'Antarctic' remains a bestseller.