The 'delta plus' variant is a mutated version of the more aggressive B.1.617.2 strain that drove the second wave of infections in India, and is a 'variant of concern'

There are 48 cases of the 'delta plus' variant of COVID-19 spread across 11 states the government said Friday, adding that the maximum number of cases had been reported from Maharashtra (20).

Tamil Nadu and Madhya Pradesh have nine and seven cases. Kerala has three. Punjab and Gujarat have two each, and Andhra Pradesh, Odisha, Rajasthan, Karnataka and Jammu have one each.

Two days ago the government said 40 'delta plus' cases had been registered so far.

The government, however, said that at this time the spread is still "very localised".

The virus strain had been isolated and is being cultured by the ICMR-National Institute of Virology, and tests to check its resistance to existing Covid vaccines were ongoing, the government added.

The government also said 'delta plus' variant cases had been reported from 12 other countries, including the United States, the United Kingdom, Portugal, China, Japan Russia and Switzerland.

On Wednesday the government said the 'delta plus' variant had been listed as a 'variant of concern'. States reporting cases were urged to take "immediate containment steps". The Maharashtra government has urged district officials to be cautious while re-emerging from lockdowns.

The government earlier said the 'delta plus' variant has possible increased transmissibility, higher binding capacity to the lung cells and resistance to monoclonal antibody treatment. 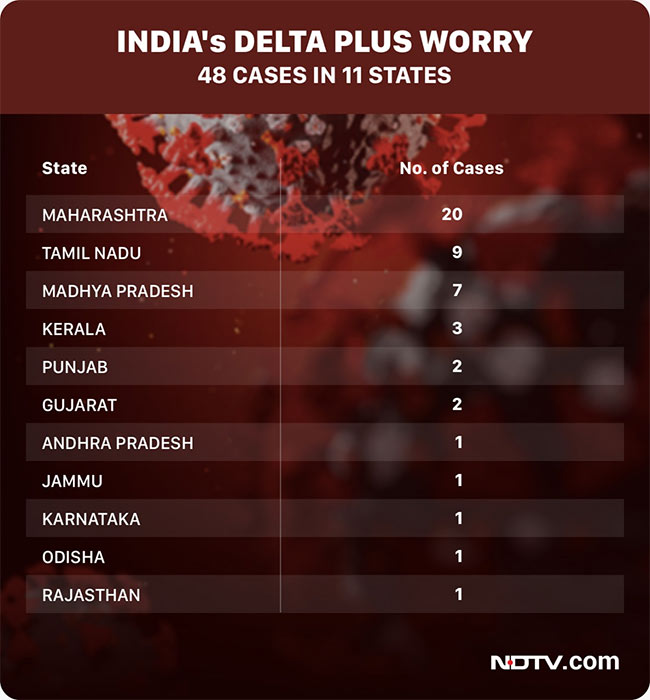 The 'delta plus' variant is a mutated version of the more aggressive B.1.617.2, or 'delta', strain that drove the second wave of infections in India and has already been listed as a 'variant of concern'. Identified as B.1.617.2.1, it is characterised by the K417N mutation in the spike protein of the virus.

The spike protein is what helps the virus infect human cells, and K417N has been associated with immune escape, or evasion, that leaves the virus more immune to vaccines or drugs.

The Health Ministry, however, has said the variant's immune escape capabilities and its ability to cause a more severe infections or transmit more aggressively "is under continued surveillance".

This week news agency ANI reported ICMR-NIV had decided to conduct a study to determine the 'delta plus' resistance to Covishield and Covaxin - the two Covid vaccines currently in use in India.

Amid growing concern about the spread of variants like 'delta plus' - which may be more infectious and more resistant to drugs, IGIB Director Dr Anurag Agarwal told NDTV "... at this point there is no evidence to suggest 'delta plus' has anything to do with a possible third wave."

"My institute (the Institute of Genomics and Integrative Biology) has sequenced more than 3,500 samples from Maharashtra - covering samples from April and May. We can see these ('delta plus' variants) are very much there. But these constitute less than one per cent," he said.

Even in areas where the numbers look worrying they are not "very high", he said, "Things look stable."

Dr Agarwal, however, clarified that any 'delta' COVID-19 remains a 'variant of concern'.

A study conducted by Oxford University and published in the journal Cell said COVID-19 vaccines made by AstraZeneca (which is used in India as Covishield) and Pfizer-BioNTech remain broadly effective against 'delta' and 'kappa' (B.1.617.1) variants.

However, the concentration of neutralising antibodies in the blood was somewhat reduced, which may lead to some breakthrough infections, they cautioned.