BJP leader Jyotiraditya Scindia and Congress' Mallikarjun Kharge are among the first-time members of the House who took oath. 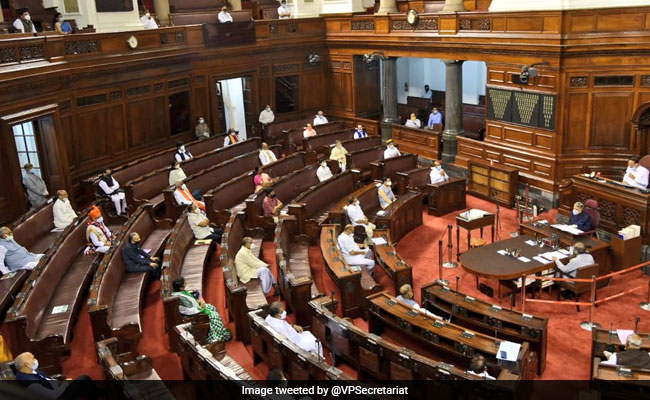 MPs should ensure that their conduct in the House is in conformity with the rules: Venkaiah Naidu

Rajya Sabha Chairman M Venkaiah Naidu urged 45 newly-elected members of the House who took oath on Wednesday to uphold rules and procedures while discharging their duties as lawmakers and not fall prey to disruptions.

The 45 members, including 36 first-timers, took the oath of office in the Rajya Sabha chamber while following physical distancing norms.

In total, 61 member have been elected to the house of which 43 are first-timers.

BJP leader Jyotiraditya Scindia and Congress' Mallikarjun Kharge are among the first-time members of the House who took oath.

Mr Scindia, who has been elected to the Rajya Sabha from Madhya Pradesh, greeted his arch-rival Digvijay Singh, and Mr Kharge before his oath-taking.

Mr Scindia and Mr Singh had huge differences and this was one of the reasons of Mr Scindia quitting the Congress. Mr Scindia also greeted Leader of Opposition in Rajya Sabha Ghulam Nabi Azad.

Those members who could not take oath on Wednesday will do so during the ensuing Monsoon Session.

After the oath-taking ceremony, Mr Naidu urged the MPs not to fall prey to the temptation of disrupting the proceedings of the House for "short-term gains".

The chairman suggested the members to question themselves if they had acted to enhance the dignity of the institution at the end of each day during the session and whether their conduct was ethical during the inter-session period.

"Answers to these simple questions would guide you on the right path," he said.

"Ensuring rule of law is the spirit of our law of the land (Constitution). It shall begin with your compliance with the rules and procedures of this House," Mr Naidu said.

He said as lawmakers for the nation, the MPs should ensure that their conduct in the House is in conformity with the rules and precedents.

"Time well spent is a life well lived. While the House is in session be in the House and be with the people during the inter-session period," the chairman said.

Mr Naidu suggested the first-time members of the Rajya Sabha to enhance their knowledge about the history and contribution of the House during the last 68 years by reading standard books.

He said his plan to administer oath or affirmation earlier had to be put on hold due to coronavirus-induced travel restrictions and quite a few newly-elected members expressing concerns over travelling long distances for oath taking.

Referring to the concerted efforts being made by the central and the state governments and other stakeholders to contain the pandemic, Naidu expressed hope that normal life will be resorted soon.