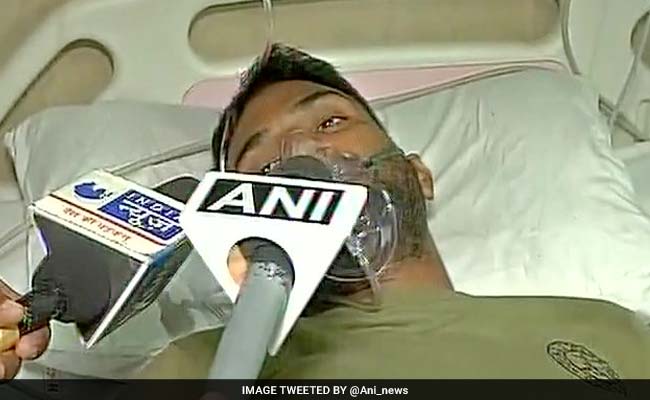 Raipur: Jawans of the 74th Battalion of the Central Reserve Police Force or CRPF were overseeing the construction of a road in Chhattisgarh's Sukma this afternoon, when about 300 Naxals ambushed them with AK-47 guns, said Constable Sher Mohammad, who was injured in the gun battle that followed. 25 soldiers, including the company commander, died and five are in critical condition.

The Naxals first sent locals to check the location of the CRPF team, Constable Mohammad said. "Later, a 300-strong Naxal group attacked us armed with automatic AK-47 and INSAS rifle. The villagers also helped them," he said from a hospital bed.

The 99 CRPF soldiers fought hard. "We retaliated, gave them a fitting response," the jawan said, adding, "we were able to gun down at least 11 to 12 Naxals, I myself shot down two to three."

Constable Mohammad, who is from Bulandshehar in Uttar Pradesh, said he was shot by a machine gun fire in the waist and the knee.

The Naxals attacked the CRPF's road clearing party around 12:30 on Monday afternoon. The jawans from the 74th Battalion were providing protection to a group of construction workers building a road in Chintagufa, a densely forested area about 70 km from Sukma, which is 360 km away from state capital Raipur.

Promoted
Listen to the latest songs, only on JioSaavn.com
The injured men have been air-lifted and sent to hospital in Raipur and Jagdalpur for treatment.

Sukma in south Bastar has been Maoist affected for many years. Last month, 12 CRPF men were killed and four were injured in a Naxal ambush in Sukma.