Three Rafale fighter aircraft which took off from France for India are scheduled to land at the Jamnagar airbase around 10:30 pm. 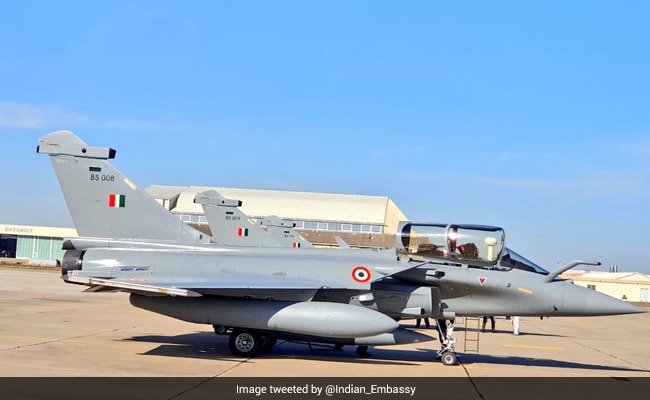 Three Rafale fighter aircraft are scheduled to land at the Jamnagar airbase around 10:30 pm.

Another batch of Rafale fighter jets have taken off on a non-stop flight to India with mid-air refuelling by the United Arab Emirates (UAE), said the Indian Embassy in France on Wednesday.

"Another batch of #Rafale take to the skies on non-stop flight to India with mid-air refuelling by UAE. Indian Air power grows further," the embassy tweeted.

According to Indian Air Force officials, three Rafale fighter aircraft which took off from France for India are scheduled to land at the Jamnagar airbase around 10:30 pm.

On Tuesday, Emmanuel Lenain, Ambassador of France to India had said that five extra Rafale jets will be ferried to India by the end of April. This would be other than the three Rafales which are arriving on Wednesday.

"Right now 21 Rafales delivered to India, 11 already ferried to India, three are right now being ferried and 5 extra will be ferried by end of April," French Envoy to India had said while speaking exclusively to ANI.

"Total in 2022, the 36 aircraft will have been delivered as per contract," he added.

The aircraft had started joining the IAF fleet in the July-August timeframe last year and were quickly operationalised by the Air Force in the shortest possible time.

The aircraft had also been deployed for patrolling along the China front in eastern Ladakh and other fronts during the height of the China confrontation.

The planes equipped with the Hammer missiles have enhanced their capability to carry out air-to-ground strikes like the one in Balakot.