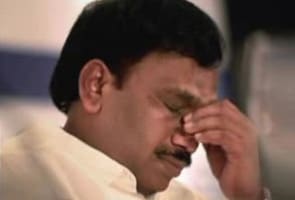 New Delhi: Former Telecom Minister A Raja has been arrested by the CBI after he was questioned this morning by the CBI for his alleged role in the 2G spectrum scam. The CBI says the arrest was based on the facts disclosed so far during the investigation. (Watch: CBI on arresting A Raja)

He is still at the CBI headquarters, where his interrogation continues. Sources say he is being evasive on key matters.

Sources say, the trio will be produced in court tomorrow.

Though the spectrum scam had loomed over his ministry since the sale of 2G frequency to telecom operators in 2008, it was in November 2010 that Mr Raja finally exited the government. What pushed him through the out-door was a report by the government's auditor which concluded that as Telecom Minister, Mr Raja under-valued spectrum and sold it to companies that he favoured even though they were largely ineligible for licenses to run mobile networks.

Mr Raja and the Congress have repeatedly argued in his defense that he followed the procedures introduced by his predecessors in the NDA government. Mr Raja has also said that by selling spectrum cheaply, he delivered high tele-density by making mobile connectivity affordable for the majority of Indians.

Mr Raja's homes and offices in New Delhi and Tamil Nadu have been raided by the CBI over the last few weeks. Computers were reportedly seized as part of the evidence that the CBI plans to present against him.

The CBI's investigation into the 2G scam is being closely monitored by the Supreme Court on the basis of several petitions, including one filed by former Law Minister Subramanian Swamy. On multiple occasions, the CBI has been accused by the court of mishandling the inquiry.

Promoted
Listen to the latest songs, only on JioSaavn.com
The 2G scam has also turned into  one of India's biggest political battles. The Opposition refused to let Parliament function during the winter session after the government refused to sanction a Joint Parliamentary Committee (JPC). The BJP has threatened that the Budget session scheduled to start soon will see the same forces at work, unless a JPC is set up.

The government has argued that in addition to the CBI and the Supreme Court, the 2G scam is being studied by parliament's Public Accounts Committee (PAC) which is headed by BJP leader Murli Manohar Joshi. Creating a JPC, it says, will only slow down the process of nailing who's to blame for the 2G scam. The Prime Minister has offered to appear before the PAC - Mr Joshi has said the offer will be considered at a later stage.