25 Trekkers On Mission To Rediscover Decades-Old Routes To Chardham

The team of hikers, photographers, documentary film makers and State Defence Response Force personnel aims to find out the present condition of the routes that were used by pilgrims decades ago. 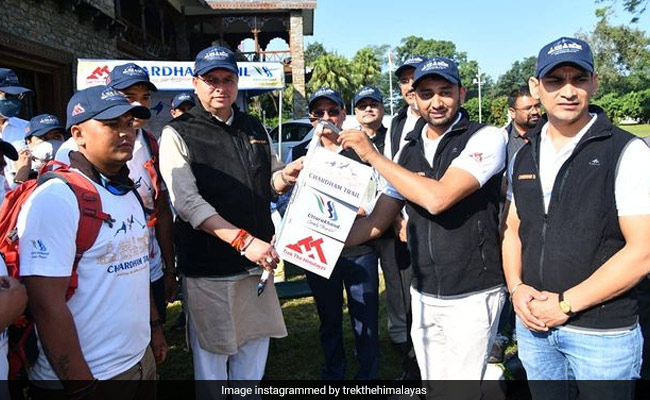 Tearing through deep forests, trudging up steep slopes and wading through mountain streams, a team of 25 trekkers is currently on an expedition in Uttarakhand to rediscover the lost trek routes to the Chardham.

Carried out by the Uttarakhand Tourism Development Board in collaboration with an organisation called Trek The Himalayas, the expedition was flagged off from Dehradun recently by Chief Minister Pushkar Singh Dhami.

The trek team of hikers, photographers, documentary film makers and State Defence Response Force (SDRF) personnel aims to find out the present condition of the routes that were used by pilgrims decades ago.

Steps will be taken by the state to revive this route based on documentation submitted by the team, Additional Secretary (Tourism) Yugal Kishore Pant told news agency PTI.

The arduous treks which took pilgrims and ascetics days to reach the Himalayan temples until the 1950s fell into disuse as easier options of travelling became available to people with the construction of motorable roads.

As helicopter services to Kedarnath, Badrinath, Gangotri and Yamunotri became available in more recent times, the ancient trails passing through shadowy woods and idyllic hill villages were forgotten completely until the Board decided to rediscover them to boost tourism and rural economy - hit hard by the Covid pandemic.

Though difficult and time consuming, pilgrims trekking to the temples had a range of stopovers every few kilometres built by the Baba Kali Kamli organisation along the way where they could rest.

"We thought why not rediscover the trek routes and offer another option to the Chardham-bound tourists and pilgrims who had more time on their hands and willing to reach the temples through the scenic trails, halting at homestays on the way, passing through the hill villages and connecting with locals," Mr Pant said.

"Reaching the temples in buses or helicopters is easy but it deprives travellers of the opportunity to experience things which they might love to if given an option. It is said that every pebble and stone on the road in the hills, every rivulet has a story to tell," he said.

A devotee or a tourist who flies in a helicopter to the temples and completes the pilgrimage in two days may fulfil a lifelong wish but he misses out on a lot for no taking the trek routes," Mr Pant said, explaining how the idea of rediscovering the routes struck him.

"Pilgrims on a trek to the Chardham will look for porters, local guides, horses and mules. They may go for homestays on the way to take a breather in between the journey and opt for local cuisine. This will open up livelihood avenues for locals and boost the village economy," Mr Pant said.

The trekking team will traverse a distance of over 1,200 km in 50 days, team leader and founder of Trek The Himalayas, Rakesh Pant, told the news agency.

"So far Gullerchatti, Phoolchatti, Mahadevsain, Mohan Chatti, Bandar chatti, Kaandi chatti, Vyaschatti and Mahadev chatti have been travelled and explored by our team. Around 80 chattis existed along the Himalayan trails in those days, of which around 30 are still in decent condition," he said.

The exploration is being documented through visual and written media. On completion, the project will be developed into a documentary.

The recce programme is divided into 5 stages. Stage 1 covers Rishikesh to Yamnoutri; stage 2 Yamnoutri to Gangotri; stage 3 Gangotri to Kedarnath; stage 4 Kedarnath to Badrinath and stage 5 would bring the team back from Badrinath to Rishikesh, he said.

The expedition also focuses on sustainability. Creating environmental awareness and promoting eco-friendly practices are a prominent part of the expedition which includes promoting a plastic-free environment by reducing the use of plastic for all daily operations.