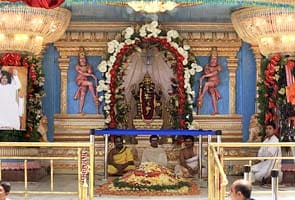 Bangalore: More valuables, including 6.09 kg of gold, 245.36 kg silver and Rs 80.50 lakh cash were recovered from the Whitefield complex of late Sathya Sai Baba during an inventory there on Wednesday.

The inventory was conducted by the Sathya Sai Baba Trust members along with Bangalore Urban district deputy commissioner at the Brindavan ashram near Whitefield in the outskirts of the city.

The gold and silver found were in the form of trinkets, medallion, chains, coins, mainly offerings made to the spiritual guru during the past several years, ashram PRO Anantharaman said.

The valuables were largely recovered from one of the rooms where Baba used to sleep and meet visitors, he said.

No gold or silver bricks were found during the inventory, Anantharaman said, adding most of the articles were used during puja.

The ashram, inaugurated by Sai Baba on June 25, 1960, served as his residence during his stay in the city.

This is the fourth time that an inventory of precious metals and cash in Sai Baba's personal chambers is being conducted at the instance of the government after he passed away on April 24.

The most recent inventory was conducted on Monday at the second building of Yajur Mandir and four rooms of Poornachandra Chamber in Puttaparthi. Officials had found 34.5 kg gold, 430 kg silver besides cash worth Rs 1,90,53,899, media coordinator of the trust A Anantharaman said.

Promoted
Listen to the latest songs, only on JioSaavn.com
In the first inventory made on June 16, 98 kg gold, 307 kg of silver apart from Rs 11.56 crore in cash was found whereas on July 2, when the second inventory was taken, gold and silver articles worth Rs 74 lakh and a diamond studded ring worth Rs 3 lakh was found.