21 killed as truck carrying them overturns near Belgaum in Karnataka 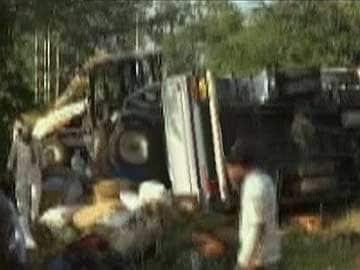 Belgaum: At least 21 people, including seven women and six children, died when a goods truck carrying them overturned at Soudatti, 40 km from Belgaum district in northern Karnataka.

The truck was reportedly carrying almost 50 people, mostly tribal labourers from Yadgir in Karnataka on their way to work on sugarcane plantations in Maharashtra.

Sources said the vehicle, which was travelling at a high speed, toppled while negotiating a bad stretch on the state highway.

Promoted
Listen to the latest songs, only on JioSaavn.com
Police said overloading may have caused the accident, which happened at around 3.30 am on Saturday morning.

The injured have been admitted to a hospital at Bailahongal in Belgaum, PTI, quoting the local police, said.