JNU Sedition Case: After almost one year the Delhi Police has received prosecution sanction against former JNU students' union president Kanhaiya Kumar and nine others in the 2016 JNU sedition case. 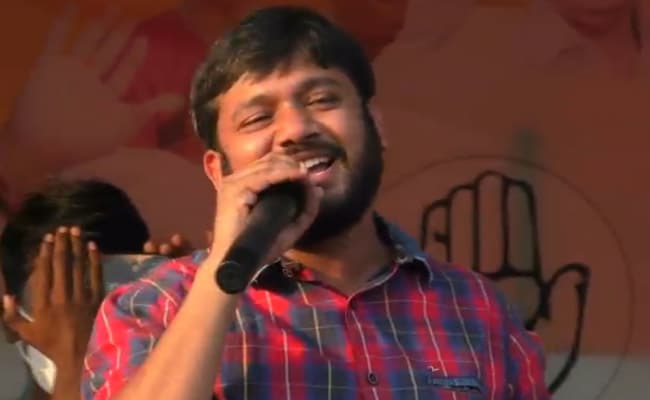 The location of phone was also cited as evidence against Kanhaiya Kumar in the 1200-page charge-sheet.

A Delhi court has taken cognisance of the charge sheet filed by Delhi Police in the Jawaharlal Nehru University (JNU) sedition case in which Communist Party of India (Marxist) leader Kanhaiya Kumar is an accused along with others.

Chief Metropolitan Magistrate (CMM) Pankaj Sharma on Monday, after taking cognisance of the matter, issued summons to all accused named in the charge sheet for March 15.

After almost one year the Delhi Police has received prosecution sanction against former JNU students' union president Kanhaiya Kumar and nine others in the 2016 JNU sedition case.

In its charge sheet, the police claimed JNU student leader Kanhaiya Kumar led a procession and supported -- along with others named as accused -- seditious slogans raised on the JNU campus on February 9, 2016, during an event to mark the hanging of Parliament attack convict Afzal Guru.

Earlier, the matter was adjourned several times due to the pendency of required sanction from the concerned department.

In the charge sheet filed in a court in January 2019, Delhi Police had said that former JNU students' union president Kanhaiya Kumar and others, including former JNU students Umar Khalid and Anirban Bhattacharya, led a procession and raised anti-national slogans in the university campus during an event on February 9, 2016.

The charge sheet stated that there were video footages wherein Kanhaiya Kumar is "seen leading the students who were "raising anti-national slogans" and that he had been identified by the witnesses in the videos. "The location of mobile phone at the place of occurrence" was also cited as evidence against Kanhaiya Kumar in the 1200-page charge-sheet.

As part of other evidence, the police said the Forensic Science Laboratory had retrieved an SMS sent by Umar Khalid to Kanhaiya Kumar, asking him to "arrive at Sabarmati Dhaba, JNU, as their permission had been canceled by the JNU administration, "under the Code of Criminal Procedure (CrPC)"