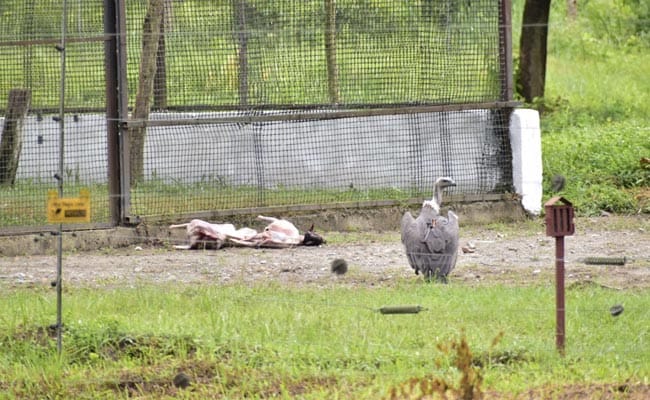 India marked a landmark moment for vulture conservation with the second phase of reintroduction programme of critically endangered Oriental White-backed Vulture at Rajabhatkhawa near the Buxa Tiger Reserve in Alipurduar of West Bengal. Ten critically endangered Oriental White-backed Vulture were released from an aviary with the help of a pulley located in a hide which was located 50 metres away. All the ten vultures were over two years old and were the Oriental White Backed species which are critically endangered as per International Union for Conservation of Nature (IUCN) status. The species has declined by 99.9% in wild in India. The birds were deployed with satellite tags also known as Platform Transmitter Terminal (PTT). With the help of these PTT the birds will be now continuously monitored through satellites.

"Vultures are called as ecosystem doctors for the role they play in our ecosystem. Their population has reduced massively in last decades. Such efforts are important strop to check their extinction. This time 10 critically endangered oriental white backed are released in wild. They will be monitored and in future also phase wise more will be released," Deputy Field Director of the Buxa Tiger Reserve, Parveen Kaswan, IFS, told NDTV.

"A flight of hope and freedom. In another conservation milestone today 10 critically endangered Oriental White Backed vultures were released. They are captive bred at Vulture Conservation Breeding Centre & are fitted with Platform Transmitter Terminals for monitoring," Mr Kaswan tweeted, sharing a video of the moment.

A flight of hope & freedom. In another conservation milestone today 10 critically endangered Oriental White Backed vultures were released. They are captive bred at Vulture Conservation Breeding Centre & are fitted with Platform Transmitter Terminals for monitoring. pic.twitter.com/auQk9FhPWk

According to estimates by the Bombay Natural History Society (BNHS), India had a vulture population of 40 million in the 1980s, but that number dropped by more than 99 per cent in the 1990s and this was attributed to the use of an anti-inflammatory drug called diclofenac, which was routinely used to treat cattle in veterinary medicine. In 2006, India banned the use of the drug for treating cattle.

Dr Bivash Pandav, Director, BNHS, said: "Since 2002 BNHS has been carrying out conservation breeding of three critically endangered species of vultures Pinjore (Haryana) Rajabhatkhawa (West Bengal) Rani (Assam) and Van Vihar (Madhya Pradesh). The three species are Oriental White Backed vultures, Long Billed vultures, and Slender Billed vultures. BNHS has successfully bred them in captivity and has started experimental release of these captive vultures to return them back to the wild. Rajabhatkhawa centre is receiving support from the Government of West Bengal and Government of India where ten of these captive-bred vultures were released in 2021 and all ten of them have survived in the wild. In the second phase, we have released ten more oriental white backed vultures into the wild today."

"In recent decades, the population of these white backed vultures has been reduced by 99.9 per cent. Whereas they are ecosystem doctors and has important role to play. Platform Transmitter Terminals are fitted to monitor the activities of these vultures in wild. Monitored via satellites," Mr Kaswan added in a tweet, explaining that these vultures will also be monitored after their release.

"The conservation breeding of vultures has been done systematically and scientifically in near natural conditions. The Vulture released today were kept in pre-release aviary since October 2021 and they had several interactions with the free ranging birds which were attracted outside the pre-release aviary by offering them food," Mr Kaswan explained.

Former Director of the Bombay Natural History Society, Dr Deepak Apte told NDTV, "Releasing captive-bred vultures is a landmark day for the vulture conservation programme in India. I have been part of this project and it is a very encouraging thing. We have captive-bred vultures in four states. These are Madhya Pradesh, Haryana, Assam, and West Bengal. The current release is a very significant step that credibly established a successful vulture conservation breeding programme in India. This is a kind of an insurance policy that India now has as a robust framework to captively breed vultures and release them in the wild when the need arises."

The way the vultures were released is called a soft Release/reintroduction programme. This release also makes Rajbhatkhawa Vulture Conservation Breeding Centre of Buxa Tiger Reserve (BTR) one of the most successful centres in the country. Likewise, to conserve these critically endangered and important species in future also phase wise release will take place, the centre said.