With 'T-Hub', This City Wants To Be India's Start-Up Headquarters

T-Hub has lots of open spaces that make for a futuristic work evironment and free flow of ideas, the promoters say.

Hyderabad: Catchy slogans on colourful walls at a brand new 70,000 square feet facility set the tone for Hyderabad's big bid to be India's start-up capital. Dubbed T-Hub, the start-up incubator built on a public private partnership will be inaugurated by business magnate Ratan Tata on Friday.

Expected to house over 300 start-ups and a futuristic workspace for up to 800 people, the Telangana government has invested Rs 40 crore to build the biggest incubator facility in the country.

"We are saying walk in with an idea and walk out with a product," says KT Rama Rao, Telangana IT minister.

"There are world-class facilities but we are offering something priceless and that is mentorship. Indian School of Business will provide business mentorship. IIIT and IIT will give technology support and Nalsar, the best law school in the country, will guide through the vagaries of intellectual property rights protection, legalities," he said. 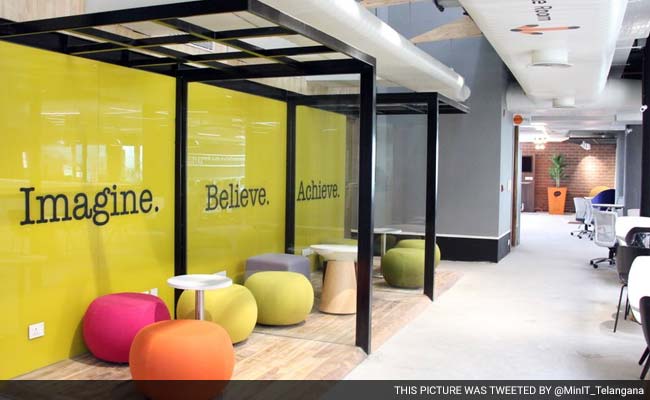 The promoters of the facility say the fact that it is a public private partnership could be the key to its success.

"If you take Silicon Valley, the University Avenue, the joke is that you just learn by osmosis. If you walk down the street, knowledge is just hitting you from everywhere. When you have such a large bunch of people, investors, mentors, start-ups from multiple areas, the neighbourhood, you just learn by talking to other people," K Srinivas, the Chief Operating Officer of T-Hub, said.

Ramesh Loganathan of Hyderabad Software Export Association, said "I don't think there is any other place in the country where 800 people will be working like this in the same building. Just the buzz...one month from now when all this will be occupied, is going to be unbelievable."