Protesters Clash With Police Over Gang-Rape, Murder Of Telangana Vet

Hyderabad protest: Stones were hurled at a police vehicle as the accused were being taken to jail in Hyderabad, and the police used mild force to control the crowd 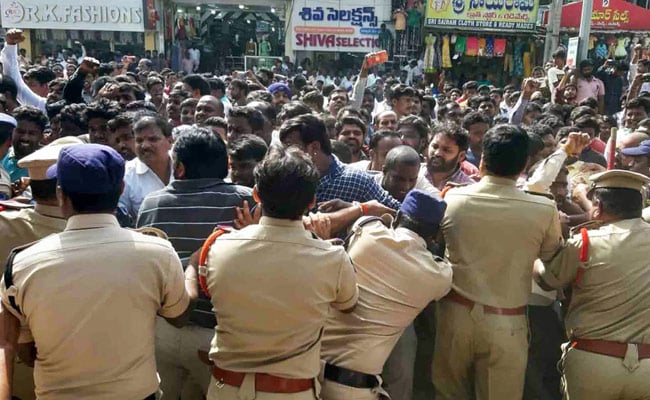 Hyderabad protest: People came out on the streets to protest against the police

Protests were held at several places on Saturday against the rape and murder of a 26-year-old veterinarian in Hyderabad with crowds hurling stones at police personnel, who escorted the four accused to jail from a police station in Telangana's capital. The protesters demanding that the accused be handed over to them.

The accused were sent to judicial custody for 14 days by the executive magistrate who passed the order at Shadnagar police station, where they were lodged, as they could not be produced in court due to presence of a large number of protesters.

Stones were hurled at a police vehicle as the accused were being taken to jail in Hyderabad, and the police used mild force to control the crowd.

Union Minister of State for Home Kishan Reddy said the Telangana Police had adopted a casual attitude instead of having a sense of urgency that could have possibly saved the life of the 26-year-old veterinarian, who was gang-raped and murdered before her body was burnt in the intervening night of Wednesday-Thursday.

"No one can be turned away from the police station like that. We will make it compulsory for every police station to accept a complaint. The FIR can be filed later; first they should have helped to search the girl," Mr Reddy told NDTV.

The minister had come to visit the family of the young woman and offer condolences.

"We take a very serious view of the developments. We intend to amend the IPC (Indian Penal Code) and CrPC (Code of Criminal Procedure) to make the law such that punishment is quick through fast-track courts. We will discuss this in great detail in a meeting of DGPs (senior police officers) between December 6 and 8," he said.

"We want to publicise 112 as an emergency response system. Every woman must download the app to use in emergency. At the same time, the police and law enforcement authorities, her family, even some volunteers will be alerted, so response can be quick," the minister said. "We have recently introduced it in Delhi and want to publicise it everywhere."

The public too was in no mood to spare the Telangana Police. They demanded a responsive, sensitive and a pro-active approach of the police and questioned policing priorities and attitude.

Protests were also organised across the country, with Hyderabad being the epicentre.