The three-tier tiffin box worth several crores may not have been used by the Nizam, but one of the thieves used it every day to have food, revealed the Hyderabad police.

The sensational robbery at the Nizam's Museum in Hyderabad has been solved within a week of a Hollywood-style heist by two men who escaped to Mumbai and lived it up in a luxury hotel before being tracked down.

The three-tier tiffin box worth several crores may not have been used by the Nizam, but one of the thieves used it every day to have food, revealed the Hyderabad police.

In the dead of night on September 2, the gang of two entered the museum at Purani Haveli in the old quarters of Hyderabad through a ventilator shaft. They removed an iron grill and crawled into the tiny space to access the treasures.

"They were just about to pick a precious Quran with golden cover in the next enclosure when they heard the early morning fajar ka azaan (Muslim prayers). We don't know if it was sentiment or they got scared, but they didn't pick up the holy book," Hyderabad police commissioner Anjani Kumar told NDTV. 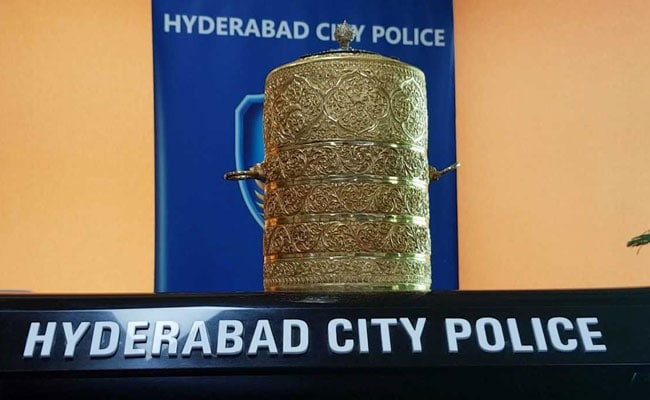 The precious Hyderabad Nizam's gold tiffin box weighs 2 kg and is studded with ruby and diamonds.

The market value of the robbed goods - just the gold - would have fetched them Rs 1 crore. But their antique value is many times more. "It could have been sold for 30-40 crore rupees in the Dubai market," the police chief said.

After launching a massive hunt, the police first hit a dead-end with hardly any footage of the thieves, who had turned away the CCTV cameras while in action. There are about 32 security cameras on the premises.

The men had 18 exit routes to choose from. One camera captured two men getting on a bike and riding away. But it was almost impossible to see their faces, because of the angle and the fact that they were using a muffler, apparently as protection from the morning cold.

The pillion rider was seen talking on a mobile phone. To track that call, the police put 22 teams on the job. They went through data from some 300 towers.

"All that went waste as the accused had pretended to talk on phones to mislead us, whereas their phones had no SIM," Mr Kumar said.

The police next checked the profiles of 30-40 breaking-and-entering artistes known to use similar modus operandi, and also slim enough to fit into a ventilator.

They caught a break when video surveillance in the Charminar area revealed that two men on a bike had stopped after the radiator hit a stone.

When an abandoned bike was found in the nearby Zaheerabad district, with a radiator problem, the two bikes were compared and seemed to be the same.

The thieves had fled to Mumbai, checked into a five-star hotel and lived a fancy life for a couple of days. However, the thieves were unable to find a buyer in Mumbai and returned, after which they were caught and questioned.

The main accused is said to be 25-year-old Ghouse, a professional mason. He also committed robberies and was wanted in around 26 other cases.

"He even tried to create an alibi as though he was in jail for a previous offence during the time of the theft," said the police chief.

The police received a clue from the location, as there were two marks on the wall, seemingly made by a professional mason.

The thieves had made the marks on the wall to mark out which ventilator, out of the 28 similar ones, they were to climb into, to commit the crime.

His accomplice is younger but he was the mastermind. The idea struck him when he visited the museum like a tourist a couple of months ago. The pair had then recceed the place five or six times before the robbery.