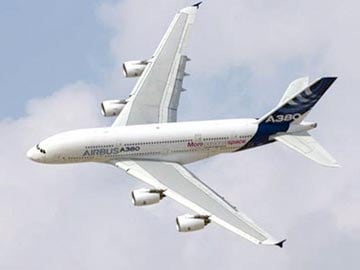 File photo of an Airbus A380, the world's largest passenger jet.

Hyderabad: The fourth edition of the Hyderabad international air show will kick off on Wednesday and is likely to see signing of some big ticket deals by the domestic aviation players.

The show, with the theme 'Enhancing Air Connectivity' is being jointly organised by the aviation ministry and industry body FICCI at the Begumpet airport and will be inaugurated by Aviation Minister Ajit Singh, an official release said today.

The five-day expo is expected to be attended by more than 250 exhibitors, including Airbus, Boeing, Bombardier, Dassault and Rolls Royce besides the French ambassador Francois Richier, US trade and development agency director Leocadia Zak and central and state government officials, it said.

Andhra Pradesh Governor E S L Narasimhan will be the chief guest at the opening ceremony, it said, adding that Karnataka will be the focus state while the US will be the partner country this year.

The show will also see on display some of the biggest aircraft like Airbus A-380s and Boeing Dreamliners, with the Gulf carrier Emirates already announcing its plans to fly its A-380 to Hyderabad for the mega event.

India, which is the ninth largest aviation market in the world with nearly 400 functional aircraft, is projected to become the third largest by 2020 with the number of aircraft expected to touch 1,000 mark, the release said.

Promoted
Listen to the latest songs, only on JioSaavn.com
To mark the occasion, aerobatics display will be presented by two teams from London.