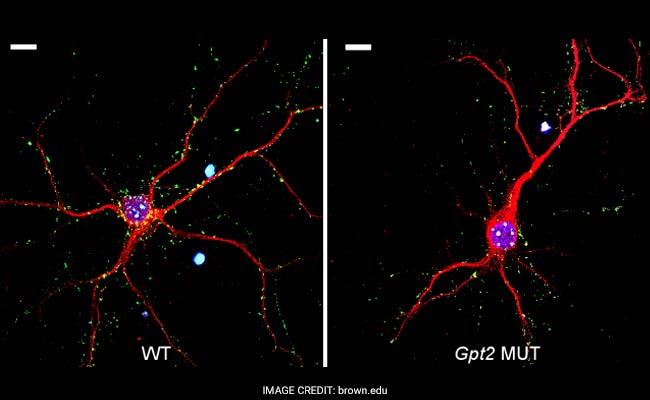 Mouse neuron on the left has more synapses than the one with a mutation in the gene GPT2.

Washington: Scientists have identified the genetic mutations behind a rare, unnamed neurological disorder that was identified among siblings in two families from Pakistan and Oman.

The researchers also replicated the mutation identified in the gene GPT2 in lab cultures and mouse models to understand how the altered DNA cause the disease.

"This is a clear, new neurogenetic disorder due to mutations in GPT2," said Eric Morrow, associate professor at the Brown University in the US.

"In addition to the relevance this has to the diagnosis of developmental disorders, and potentially therapeutics, it is also a window into how the brain develops and how the brain functions," Morrow said.

The gene GPT2 is expressed in the nucleus of cells, but the enzyme it generates appears vital to metabolic pathways in the mitochondria, organelles which provide energy and biosynthetic building blocks to cells, researchers said.

The consequences of the mutations appear to be in leaving developing brains without biosynthetic abilities to grow properly, and to deficits in metabolites that could help prevent degeneration.

Moreover, the G in the gene name stands for glutamate, an important neurotransmitter that governs how brain cells, or neurons, connect and interact.

"To find a glutamate metabolising enzyme that is associated with a brain disease is an opportunity to understand how that neurotransmitter might work or be modulated," Morrow said.

The team began the investigation more than five years ago when they were studying two families in Pakistan and Oman with children whose symptoms included below-normal postnatal brain growth, intellectual disability and progressively worsening motor problems.

The children, 14 in all across the two large families, typically were able to walk by age three, yet a majority lost that ability later as motor control diminished in their legs, as a condition called spastic paraplegia emerged.

Spastic paraplegia is generally considered to involve a neurodegenerative cause, Morrow said.

The team traced a genetic mutation to chromosome 16, and they were able to find two specific mutations in GPT2.

They created models in which the mutations were induced in human cells and also in mice.

Like the children with GPT2 mutations, developing mice with the mutations also showed reduced neural and brain growth.

In the human cells they saw that mutations led to reduced enzyme activity. They also determined that the protein locates in the mitochondria.

Promoted
Listen to the latest songs, only on JioSaavn.com
The research was published in the journal PNAS.