Horror On A School Bus In Gurgaon, Attacked By Mob Protesting "Padmaavat"

Children from Classes 2 to 12 were in the bus of GD Goenka World School. The youngest children are heard crying in a mobile video after "Padmaavat" protesters stoned the bus

"Padmaavat" row: Kids from Classes 2 to 12 were in the bus of GD Goenka World School in Gurgaon

Gurgaon: Little children crouched on the floor, some clamping their mouth in fear, as a mob protesting against the film "Padmaavat" threw rocks at their school bus in Gurgaon near Delhi on Wednesday afternoon.

More than a dozen children of the GD Goenka World School, from nursery to Class 12, were on the bus with teachers and staff, on their way home, around 3 pm. The youngest were heard crying in a mobile phone video that has captured several terrifying moments on the bus.

Teachers and students were seen on the space between the seats, ducking to take cover from the hail of stones. A teacher had her arms wrapped around a frightened girl.

Showing remarkable presence of mind, the driver drove away from the attackers and maneuvered the bus to safety.

The school bus was right behind a state-run bus that had been set on fire and wrecked by the mob.

After the attack, the seats were filled with shards of glass.

Policemen were present but they could do nothing to help the group, the teachers and staff complained.

"There were policemen, but no one was listening to them. The mob didn't care... We covered all the children and made them sit on the floor," said a teacher.

Delhi Chief Minister Arvind Kejriwal blamed the Haryana government for their inaction. "Utterly shameful. More disgusting is the complicity of those governments who are allowing it through their inaction," he tweeted.

Some schools in Gurgaon have announced that they will be closed on Thursday. 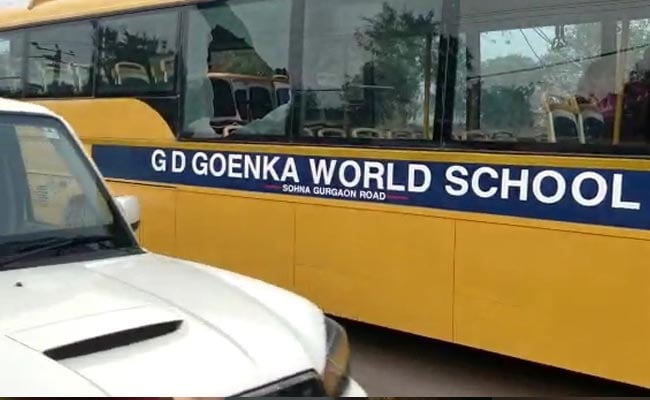 "Padmaavat" row: There were no policemen to help the students of GD Goenka World School in Gurgaon, the teachers and staff complained

Gurgaon Police Commission Sandeep Khirwar told NDTV that strict action will be taken against those involved in the violence. "This is a very condemnable incident. We have brought some culprits to book. Will take stringent action against them," he said.

"Padmaavat" is set for release today but groups like Karni Sena have vowed to block the film at all costs, in defiance of Supreme Court orders. The protesters insist that the film twists the story of 14th century Rajput Queen Padmini, who preferred to jump into a fire to surrendering to Delhi Sultan Alauddin Khilji.

Violence and arson has been reported from parts of Haryana, Gujarat, Rajasthan and Uttar Pradesh -- the states that had initially banned the movie despite the censor board allowing it with tweaks.

Promoted
Listen to the latest songs, only on JioSaavn.com
The Supreme Court on Tuesday rejected Rajasthan and Madhya Pradesh's final attempt to ban the film on grounds of potential violence. The court said banning a film violated creative freedom.

"Padmaavat" stars Deepika Padukone as Queen Padmini, Shahid Kapoor as Maharawal Ratan Singh, the husband of Padmavati, and Ranveer Singh as Alauddin Khilji who leads an invasion to try to capture the queen.

National Capital Region To Shrink As Per New Plan For 2041. Details Here