Arvind Kejriwal calls in police to control crowd outside house 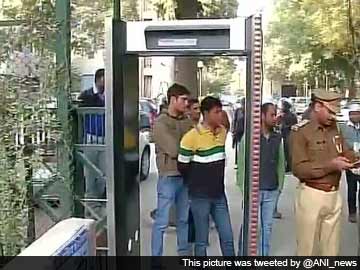 Ghaziabad: As a large number of people today gathered outside Chief Minister Arvind Kejriwal's house in Kaushambi, Delhi and Uttar Pradesh Police had to make special arrangements to manage the influx of visitors.

While the UP Police are managing the traffic and crowd influx outside the premises, a team of Delhi Police in plain clothes are stationed inside the housing society in Ghaziabad where Mr Kejriwal holds the Janata Darbar, a senior UP police official said.

The UP Police have installed a doorframe metal detector at the main gate of the society.

"Hundreds of people are coming to meet the Chief Minister and when he comes out to meet them, it becomes chaotic. It is difficult to manage the crowd. In order to prevent the situation from going out of hand, Delhi Police will be taking care of the crowd at his residence and we will manage the traffic and crowd outside," Public Relations Officer of SSP Ghaziabad, S P Singh, said.

Soon after becoming the Chief Minister, Mr Kejriwal has been holding a Janata Darbar every morning to listen to grievances of the people.

Meanwhile, senior AAP leader Sanjay Singh said that they have not demanded a security cover for the Chief Minister, "We have just asked them to manage the crowd."

Later in the day, Ghaziabad SSP Dharmendra Singh and District Magistrate SVS Ranga Rao met Mr Kejriwal and discussed security measures to be taken in and around the residential society.

Mr Kejriwal told them that he does not require any personal security but asked the officials to take just the minimum precautionary measures required for crowd management.

"We don't want to take a risk. Hence, we have installed a metal detector at the society's entry gate. Besides, around 12 police personnel would be deployed 24 hours outside (Kejriwal's) residence," Mr Singh said.

"Nobody will be stopped from entering the society. Our focus is on traffic and crowd management," he added.

Mr Singh said that discussions had been held with Delhi Police regarding the security measures to be taken in the area and the needful was being done in that regard.

Promoted
Listen to the latest songs, only on JioSaavn.com
"We met the (Delhi) CM regarding security outside his residence, but he again rejected our request and said that police should manage the traffic situation on the roads near his house so that the common man doesn't face problems," said Mr Singh.