Which Is Your Favourite Of Madhuri Dixit's 3 Looks In Her Post? We Love Them All 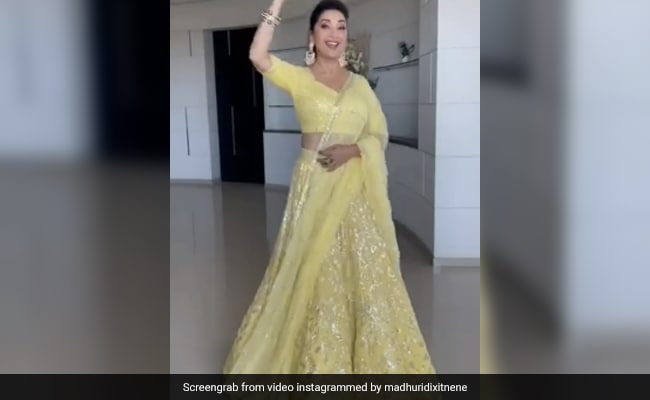 A still from the video featuring Madhuri Dixit.(Image courtesy: madhuridixitnene)

Actress Madhuri Dixit, on Friday, treated her fans to a new compilation video of herself. In the video, the 54-year-old actress took the outfit change challenge. The video features Madhuri Dixit in three different ethnic outfits. She can be seen dancing to the tune of Billie Eilish's Therefore I Am as she swaps from one outfit to another, in the video. While the first outfit is a shimmery grey sequined saree, second one is a gorgeous lehenga in the shade of lemon yellow. The last outfit that Madhuri wore in the video is a peach sharara set. Sharing the video on Instagram, the actress asked her fans to choose their favourite look from the three. "Which one's your favourite?" the Madhuri wrote in the caption of the post.

Fans of the actress chimed in and commented on the post revealing their favourite look from the video. Other fans dropped heart and fire emojis in the comments section of the post.

Madhuri had also dropped pictures of herself dressed in the above-mentioned outfits through three separate Instagram posts.

Madhuri, who serves as one of the judges of the dance reality show Dance Deewane, recently returned to the sets of the show after taking the second dose of the COVID-19 vaccine.

The Hum Aapke Hain Koun! actress received her second and final dose of the COVID-19 vaccine last month. Sharing a picture of herself on Instagram, she urged everyone to get vaccinated to fight COVID-19.