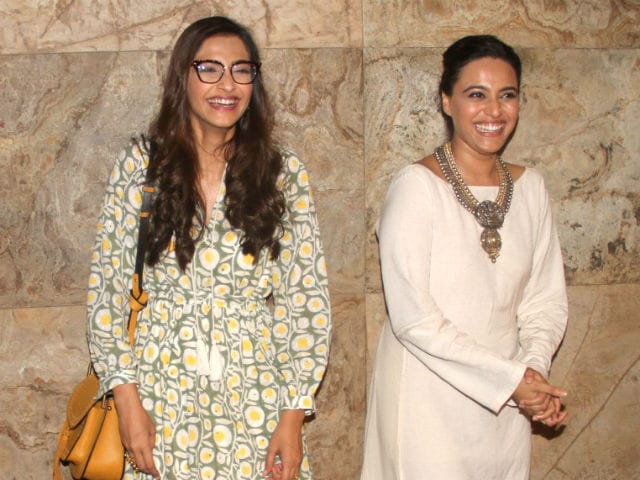 "It was a beautiful film. Swara Bhaskar has done a beautiful job. I think she is the best actress currently. It feels good that such films are made. Hopefully more such good films will be made and will do well. I'm very happy that this film is doing well at the box-office," Sonam said at a special screening of the film where veteran writer Salim Khan and his wife Helen were also present.

Sonam and Swara are good friends and featured together in Salman Khan's film Prem Ratan Dhan Payo. Sonam had also unveiled the poster of Nil Battey Sannata. Reports also suggested that Sonam and Swara are set to feature in a film together, to which Swara had said that it was "too early to comment."

About director Ashwiny Iyer Tiwari, Sonam said: "You don't even realize that it is Ashwiny's first film. I had to ask her if it was her first. How well she has extracted work out of the actors. I am very impressed."

"I hadn't watched it as I have been travelling for many months now. I was completely bowled over. I cried a lot in the film. At the interval point in the first half and constantly in the second half from the first minute till the end, I was crying," said Sonam.

Sonam also praised the plot of the film.

"There are 2-3 USPs. The first thing being that it is a mother-daughter story, a story of a mother. Our parents, our mothers give sacrifice so much in life by working hard for our dreams. In India, we kids are our mother's dreams and that is what she has shown in the film. It's beautifully done and o it also talks about education," added Sonam.