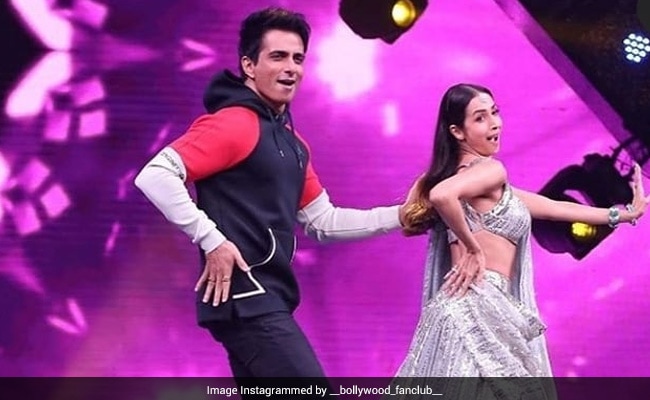 Bollywood actor Sonu Sood was the latest guest to visit the sets of the TV reality show India's Best Dancer, where Malaika Arora features as one of the judges alongside choreographers Geeta Kapoor and Terence Lewis. Many pictures from Sonu's visit on the show surfaced on social media and are trending big time. In some of the pictures, the duo can be seen doing the hook step of the song Munni Badnaam Hui. Sonu Sood and Malaika Arora shared screen space in the aforementioned song from the 2010 film Dabangg, which became a chart buster. In Dabangg, Salman Khan played the lead role, while Sonu Sood starred as the antagonist. The film marked Sonakshi Sinha's Bollywood debut.

Check out the viral pictures here:

Sonu Sood has been a part of films such as Yuva, Jodhaa Akbar, R... Rajkumar, Kung Fu Yoga, Simmba and Paltan, to name a few. The actor has also starred in several Tamil and Telugu films. This year, he featured in headlines for his constant efforts to reunite stranded migrants with their families, who had been walking home since the lockdown was imposed in March. The actor also launched a toll free helpline for migrants going home.

Malaika Arora was last seen as one of the judges on the TV reality show MTV Supermodel Of The Year, alongside Milind Soman and designer Masaba Gupta. Malaika Arora is best-known for her dance performances to songs such as Chaiya Chaiya, Anarkali Disco Chali, and Hello Hello among others.