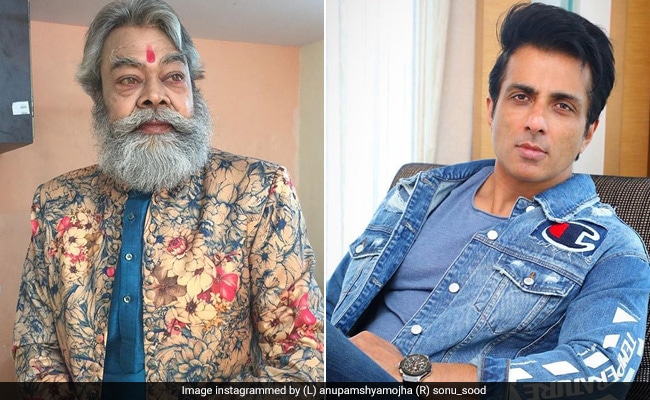 Sonu Sood, who has been helping people during the coronavirus crisis, reached out to actor Anupam Shyam, who is currently in the ICU (Intensive Care Unit) of a Mumbai hospital for dialysis, with financial help. Anupam Shyam, who is best-known for playing the role of Thakur Sajjan Singh in the show Mann Kee Awaaz Pratigya, has been undergoing dialysis at Mumbai's Lifeline Hospital. After the Cine And TV Artistes' Association (CINTAA) appealed to people to provide financial aid for his treatment, Sonu Sood came forward and tweeted that he has been in touch with Anupam's family. "In touch with them," the Dabangg actor wrote on Wednesday, retweeting CINTAA's message.

In touch with them https://t.co/yedW7S7erW

Anupam Shyam, who has worked in several TV shows and movies, was earlier admitted to Apex Kidney Care in Mumbai. However, after he collapsed during the dialysis, he was shifted to the Lifeline Hospital, his brother Anurag told news agency PTI on Tuesday. The actor's family also requested his friends from the entertainment industry to help him financially for the treatment, after which they got a call from Manoj Bajpayee, who has worked with Anupam Shyam in the 1998 film Satya, reported PTI.

"Since we couldn't admit him there, we rushed him to Lifeline Hospital immediately. He is currently in ICU. He could not get a good treatment due to financial crisis. I have informed his friends about his health and also reached out to Being Human through their website. I even got a call from Manoj Bajpayee, who said he will look into the matter," Anurag told PTI.