"DIY Batman costume for a party that wasn't fancy dress because he was my favourite super hero," wrote Sonam 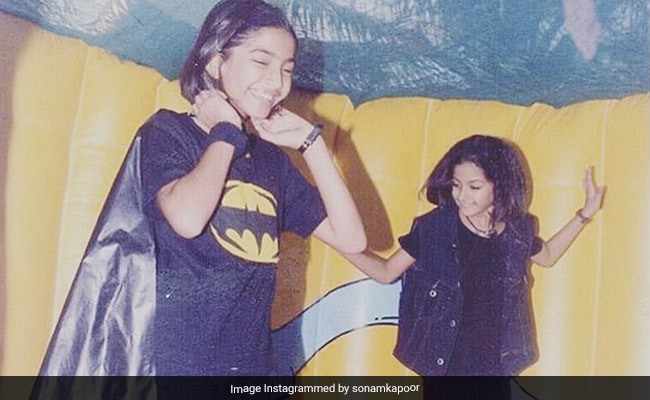 Sonam Kapoor was a bonafide fan of superhero Batman in her childhood and her latest entry on Instagram proves it in every way. On Thursday, Sonam flipped through the pages of her throwback album and shared an epic photo of herself and her sister Rhea with a hilarious anecdote. In the photograph, Sonam can be seen wearing a Batman costume along with a cape and a pair of "Batman socks." The actress and her sister can be seen dancing and jumping in the picture. Sonam, in her post, revealed that she was such a "nerd" (her word, not ours) that she made a DIY Batman costume without any occasion because Batman was her "favourite superhero." In the comments section, Sonam also revealed that the Batman logo seen in the photo is actually a cutout that she separately stuck on her black t-shirt. Well, that's another level of creativity, Sonam.

Here's what Sonam Kapoor wrote: "DIY Batman costume for a party that wasn't fancy dress because he was my favourite super hero. Also jumping and dancing with my sister Rhea Kapoor is still my favourite thing to do. (Yes, those are batman socks and yes, I was a nerd)."

Reacting to the picture, Sonam and Rhea Kapoor's mother Sunita Kapoor dropped two kissing emoticon, to which Sonam replied: "Mom, you really let me express myself." 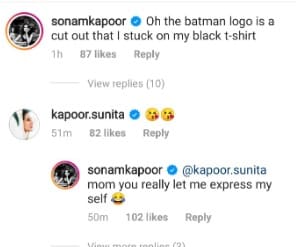 On the work front, Sonam Kapoor's last films were The Zoya Factor, in which she shared screen space with Dulquer Salmaan and Angad Bedi, and Ek Ladki Ko Dekha Toh Aisa Laga, in which she co-starred with her father Anil Kapoor, Rajkummar Rao and Juhi Chawla. As of now, she has not announced her next project.