When Kartik Aaryan Asked Sagarika Ghatge To Give His Message To Her Chak De! India Co-Star Shah Rukh Khan

"I jumped barricades to take a pic with Preeti Sabharwal," wrote Kartik Aaryan 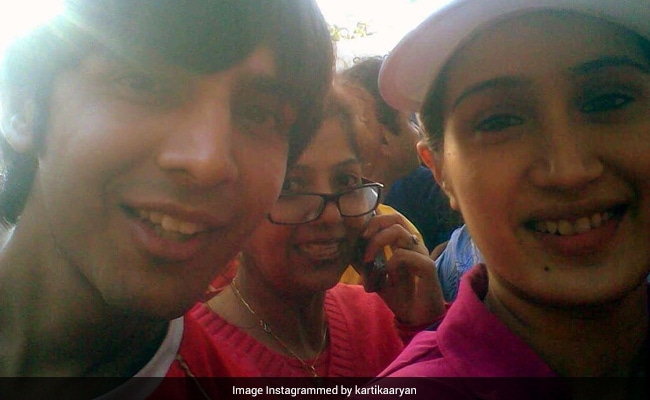 On Monday, Kartik Aaryan shared a throwback picture on his Instagram profile from the time when he was not a Bollywood star. The actor revealed that the picture was taken in the year 2008 and shared the backstory behind it. The photograph also features actress Sagarika Ghatge. Sharing the picture on Instagram, Kartik Aaryan wrote in his caption, "2008 Mumbai Marathon," adding that he jumped barricades to click a photograph with the actress and asked her to convey his greetings to her Chak De! India co-star Shah Rukh Khan. "I jumped barricades to take a pic with Preeti Sabharwal (the name of Sagarika's character in the film) and also told her Shah Rukh Khan ko mera Hi bolna. "

Kartik Aaryan made his Bollywood debut with Luv Ranjan's Pyaar Ka Punchnama and he has been a part of movies such as Pyaar Ka Punchnama 2, Kaanchi-The Unbreakable, Luka Chuppi , Guest Inn London, Pati Patni Aur Who, and Sonu Ke Titu Ki Sweety. He was last seen in Love Aaj Kal, opposite Sara Ali Khan. The actor will next be seen in Bhool Bhulaiyaa 2, co-starring Kiara Advani and Tabu. He has also signed the second installment of the 2008 film Dostana, co-starring Janhvi Kapoor and newcomer Lakshya Lalwani.

Sagarika Ghatge is best known for her role in Shah Rukh Khan's 2007 film Chak De! India. She's also starred in movies such as Fox, Miley Naa Miley Hum, Rush and the National Award-winning film Irada. She was also a participant on the reality show Fear Factor: Khatron Ke Khiladi 6. She played the role of a cop in ALT Balaji's 2019 web show BOSS: Baap of Special Services.