When Justin Bieber Confirmed His Engagement To Hailey Baldwin, We Were Surprised

The singer called Baldwin, a model and TV personality, the love of his life in a candid Instagram post following reports of their engagement. 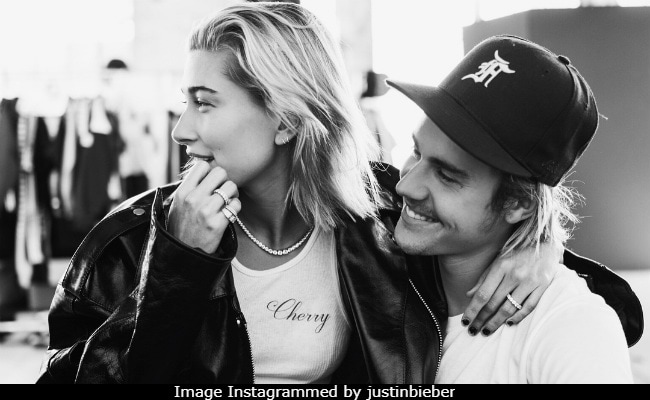 Justin Bieber confirmed his engagement to Hailey Baldwin in a lengthy and candid Instagram post Monday night. "You are the love of my life . . . and I wouldn't want to spend it with anybody else," the singer wrote.

Bieber penned the emotional post a day after TMZ reported he had proposed to Baldwin, a model and co-host of TBS' Drop The Mic, at a Bahamian resort on Saturday night: .

"Was gonna wait a while to say anything but word travels fast, listen plain and simple Hailey I am soooo in love with everything about you! So committed to spending my life getting to know every single part of you loving you patiently and kindLY. I promise to lead our family with honor and integrity letting Jesus through his Holy Spirit guide us in everything we do and every decision we make. My heart is COMPLETELY and FULLY YOURS and I will ALWAYS put you first! You are the love of my life Hailey Baldwin and I wouldn't want to spend it with anybody else. You make me so much better and we compliment eachother so well!! Can't wait for the best season of life yet!. It's funny because now with you everything seems to make sense! The thing I am most excited for is that my little brother and sister get to see another healthy stable marriage and look for the same!!! Gods timing really is literally perfect, we got engaged on the seventh day of the seventh month, the number seven is the number of spiritual perfection, it's true GOOGLE IT! Isn't that nuts? By the way I didn't plan that, anyways My goodness does feel good to have our future secured! WERE GONNA BE BETTER AT 70 BABY HERE WE GO! 'He who finds a wife finds a good thing and obtains FAVOR from the Lord!' This is the year of favor!!!!" .

It is surprising Bieber, an occasionally troubled superstar who has lamented a lack of privacy throughout his career, at times sparring with photographers and refusing to take photos with fans, would be so forthcoming about his relationship. "I feel like a zoo animal, and I wanna be able to keep my sanity," he once wrote. .

Bieber famously dated Selena Gomez, and their perpetually on-and-off status, coupled with subtle - and not-so-subtle musical references to one another - kept fans and the press guessing for years. He and Baldwin, who have their own on-off history, were also much more secretive about their relationship in the past. While addressing news of their engagement, Bieber wrote he "was gonna wait a while to say anything but word travels fast."

Bieber also referenced his religious views in the post: "I promise to lead our family with honor and integrity letting Jesus through his Holy Spirit guide us in everything we do and every decision we make." Both he and Baldwin attend the celeb favorite Hillsong church.

Among the millions of Instagram users to like Bieber's post was Ariana Grande, another celebrity whose whirlwind (and very public) engagement, to Saturday Night Live comedian Pete Davidson, has made headlines recently.

Grande and Davidson have also been unconventionally open about their relationship, sharing PDA-filled photos and glimpses of their life together - from their new apartment to a recent date night in Staten Island - on social media. A grinning Davidson offered the official confirmation of their engagement during an appearance last month on The Tonight Show With Jimmy Fallon.

"You do realize we are human beings who love and have lives. . . right?," the singer reportedly wrote in response to a tweet asserting "the devil works hard but Scooter Braun works harder."

In Bieber's case, he may not have had much of a choice in confirming the engagement. His fiancee's father, the actor Stephen Baldwin, made headlines for celebrating the engagement news in a since-deleted tweet on Sunday. "Sweet smile on my face," he wrote, adding "[God] is moving in the hearts of JB&HB."

Bieber's own father appeared to reference the engagement as well. "@JustinBieber Proud is an understatement! Excited for the next chapter," Jeremy Bieber wrote alongside an Instagram photo of his son.

Though Bieber has largely taken a step back from music after abruptly canceling his Purpose tour last summer, the interest in his engagement proves he is still very much in the spotlight. It's worth remembering what the pop star said last August when explaining his decision to cancel the tour.