"I clearly remember my father telling me that it took him over a decade to have the honour of sharing screen space with his idol," wrote Abhishek Bachchan 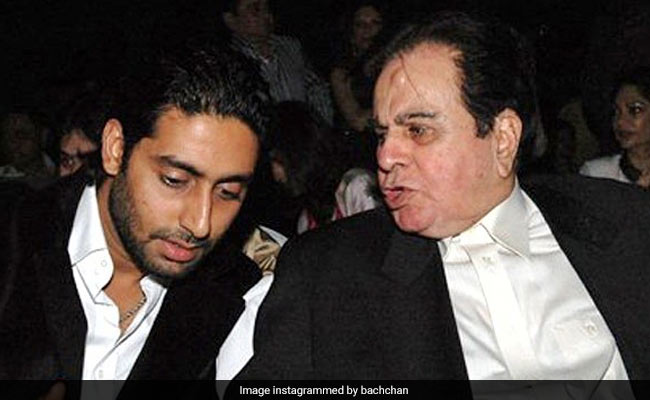 Abhishek Bachchan, who attended Dilip Kumar's funeral with his father Amitabh Bachchan at the Juhu Cemetery in Mumbai's Santacruz on Wednesday evening, remembered the legendary actor in an Instagram post a few hours later and shared that he almost got a chance to "share screen space" with him. Dilip Kumar died on Wednesday morning at the age of 98. He had worked with Abhishek's father and actor Amitabh Bachchan in the 1983 film Shakti. Sharing a throwback photo of himself and Dilip Kumar, Abhishek wrote that he was going to work with Dilip Kumar in his debut film titled Aakhri Mughal but unfortunately, the "film never got made." Dilip Kumar was to play Abhishek Bachchan's father in the film.

It was a dream come true for Abhishek to get an "opportunity" of sharing screen space with his "idol" Amitabh Bachchan's "idol" Dilip Kumar. But he "never had the honour of being able to say that he has been in a film with the great Dilip Kumar Ji."

In his post, Abhishek Bachchan wrote: "My first film was to be Aakhri Mughal. Dilip sahab was to play my father in the film" and added what Big B told him: "I clearly remember my father telling me that it took him over a decade to have the honour of sharing screen space with his idol. And here I was given that opportunity in my debut film. He told me to cherish this opportunity and to learn and observe as much as I could by watching the master at work. A film in which I get to work with my idol's idol! How lucky was I? Sadly, the film never got made and I never had the honour of being able to say that I've been in a film with the great Dilip Kumar Ji."

Abhishek Bachchan made his debut with JP Dutta's 2000 film Refugee. Aakhri Mughal was also being directed by JP Dutta before it was shelved.

In his post, Abhishek Bachchan also paid a tribute to Dilip Kumar with these words: "Today, an entire era of cinema came to an end. Thankfully many generations will be able to watch and learn but most importantly enjoy and respect the immense talent of Dilip sahab through his movies. We thank you for blessing us with your work, wisdom, talent and love. Rest in peace. My deepest condolences to Saira Ji and the family." Dilip Kumar is survived by his wife and co-star of many films Saira Banu.

Dilip Kumar was the star of classics such as Madhumati, Devdas, Mughal-e-Azam, Ganga Jamuna, Ram Aur Shyam and Naya Daur. He was also known for his performances in films like Andaz, Baabul, Mela, Deedar and Jogan. He was last seen in 1998 film Qila.