What Sushmita Sen's Evening With Her Squad Of Girlfriends Looks Like. Madhoo, Suchitra Krishnamoorthi Spotted

The party appeared to a celebratory gathering for model-actress Rhea Pillai and former model, socialite and jewellery designer Queenie Singh 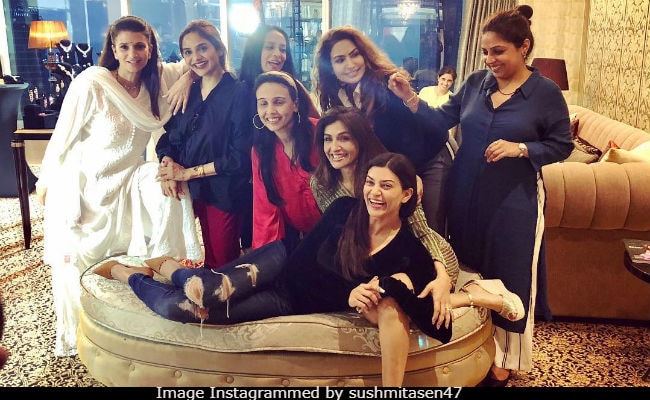 Sushmita Sen recently caught up with her squad of girlfriends and had a fabulous time, that's what she wrote on her Instagram post. The former beauty queen was spotted chilling with actresses Suchitra Krishnamoorthi, Suchitra Pillai (who starred in Dil Chahta Hai and Madhoo Shah (best known for her starring role in Mani Ratnam's Roja, and others. The party appeared to a celebratory gathering for model-actress Rhea Pillai and former model, socialite and jewellery designer Queenie Singh, who too were there. Sushmita, who is known for accompanying her posts with interesting captions, wrote this: "'A woman's greatest ally and supporter is a woman"; love watching friends grow together, as they celebrate themselves and each other in equal measure!"

In the next half of her post, this is what she added: "To your success Queenie Singh and Rhea Pillai - what an inspired evening of connecting with this incredible bunch of strong and loving women. I love you guys!" Rhea Pillai launched her first ever fashion label Temple House in collaboration with Queenie Singh's range of fashion jewellery.

"A woman's greatest ally & supporter is a #Woman " Love watching friends grow together, as they celebrate themselves & each other in equal measure!!! To your success @queeniesinghh & @rhea100 what an inspired evening of connecting with this incredible bunch of strong & loving #women #keepitsimple #keepithappy #friends #love #support I love you guys!!!

Sushmita Sen and her girlfriends appeared to be celebrating an exhibition hosted by Queenie and Rhea:

When not chilling with her friends, Sushmita Sen's favourite hang-out buddies are her two daughters - Alisah and Renee. Here's proof:

Hell yeah!!!!Happy #gurupurnima & #lunareclipse guys!!!!sometimes our worlds turn upside down, just to introduce us to a brand new perspective #embrace it & yes make it look good!!!lots of love & hugs from me & my #angels Alisah, @aaliyahsenb8 & Renee #hangingout be like this!!!mmuuuaaah!!!!

We made it!!!! #disneyworld #orlando #florida Years ago I brought Renee here & this trip Alisah & Aaliyah @aaliyahsenb8 A big off my bucket list for all the babies!! #magickingdom with magical people!! wonderful #memories #holidaydiary2018 #happiness #family P.S. smile na Neel!!! love you guys!!

Sushmita Sen was crowned Miss Universe in 1994 after which she joined Bollywood with 1996's Dastak. She has starred in films such as Main Hoon Na, Biwi No 1, Do Knot Disturb and Tumko Na Bhool Payenge. She was last seen in the Bengali film Nirbaak.