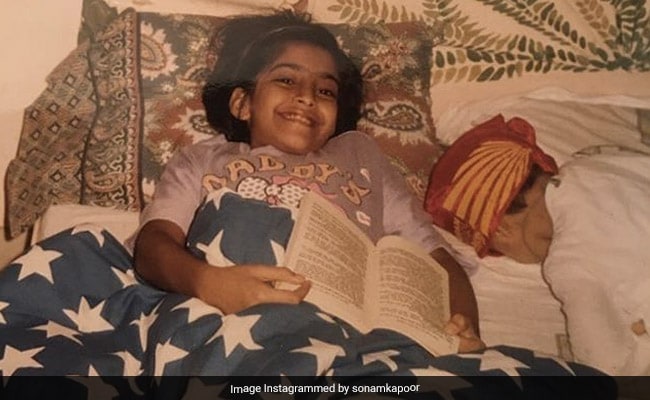 On Flashback Friday, we headed to Sonam Kapoor's Instagram for a throwback treat and there it was! Sonam, who celebrated her 35th birthday on June 9, time travelled to when she was a kid, particularly to one of the times when she was tucked in bed with her favourite book. She shared the priceless blast from the past to make a point - "Nothing has changed since then. Once a bookworm, always a bookworm," Sonam captioned her post. In the photo, little girl Sonam can be seen smiling ear-to-ear. The photo brought back childhood memories for Sonam's sister Rhea, who it appears, had memories attached to the star-printed duvet. "I remember this duvet," Rhea commented on Sonam's post. 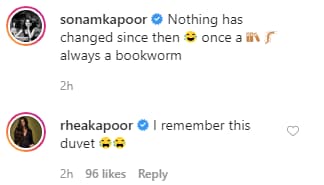 Nothing has changed since then once a always a bookworm

Like Sonam Kapoor said, nothing's changed. She still is an avid reader:

Sonam's Instagram is studded with throwback gems, mostly offering glimpses of her childhood days. Here's one from when she was Batman in a DIY costume.

Actor Anil and Sunita Kapoor are the parents of Sonam, Rhea and Harshvardhan Kapoor. The Kapoor siblings also feature in Sonam's throwback memories. Actor Arjun Kapoor is Sonam's cousin and so are Mohit Marwah and Akshay Marwah, all of who are regulars in Sonam's flashback entries.

Sonam Kapoor celebrated her second wedding anniversary with entrepreneur Anand Ahuja in May this year, when the couple were in Delhi, at Anand's house. After relaxations in lockdown restrictions were announced, Sonam recently flew to Mumbai, just in time for her birthday. She was last seen in the Zoya Factor.