What Mahira Khan 'Couldn't Do In Raees': A DDLJ Scene, Minus Shah Rukh Khan 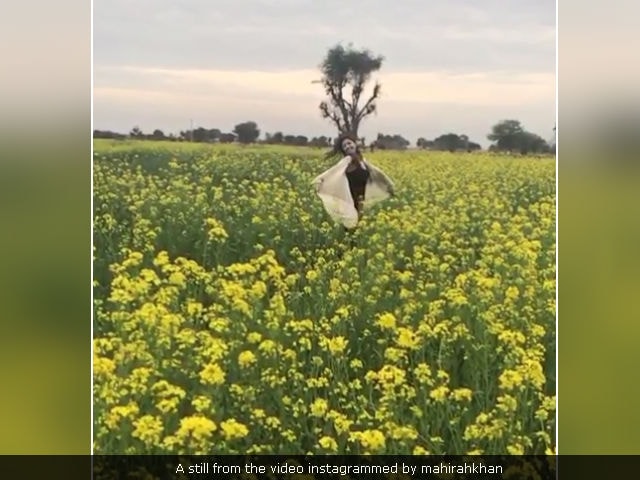 New Delhi: Actress Mahira Khan was romanced Gujarati-style by Shah Rukh Khan in Raees and while garba and kite-flying is all very well, it appears that what Mahira really craved was a Dilwale Dulania Le Jayenge moment in the mustard fields of Punjab. The 32-year-old Pakistani star made her Bollywood debut in Raees (which will likely remain her only Indian film), playing Mohsina, the love interest and later wife of SRK's character, a liquor baron named Raees Alam. A day ago, Mahira posted a video of herself on her Instagram account in which she twirls in a field of mustard - reminiscent of a famous scene from DDLJ, the iconic 1995 film starring Shah Rukh Khan and Kajol.

"What we couldn't do in Raees," Mahira Khan captioned her post, hashtagging it #cheapthrills:

Mahira, a huge star in her country, revealed last year that her mother had reacted with disbelief to learn that she had been cast opposite Shah Rukh Khan, no less. Speaking at a press conference, Mahira acted the episode out hilariously - her mother apparently began crying and insisted 'No, you are lying.'

Promoted
Listen to the latest songs, only on JioSaavn.com
The Raees hangover seems to persist, but Mahira Khan's Bollywood experience was a bittersweet one. Mid-way through 2016, tension between India and Pakistan escalated, spilling over into the film industry. Karan Johar's Ae Dil Hai Mushkil released after weeks of controversy over the casting of Pakistani actor Fawad Khan and later, SRK was photographed visiting Mahaharashtra Navnirman Sena chief Raj Thackeray, allegedly to assure him that Mahira would not be involved in promoting the film. Later, Raeesfailed to receive a clearance from Pakistan's Censor Board and so Mahira Khan's home country has not seen her Bollywood film.

Mahira Khan is the star of films such as Bin Roye and Manto, and the TV show Humsafar which co-starred Fawad Khan.