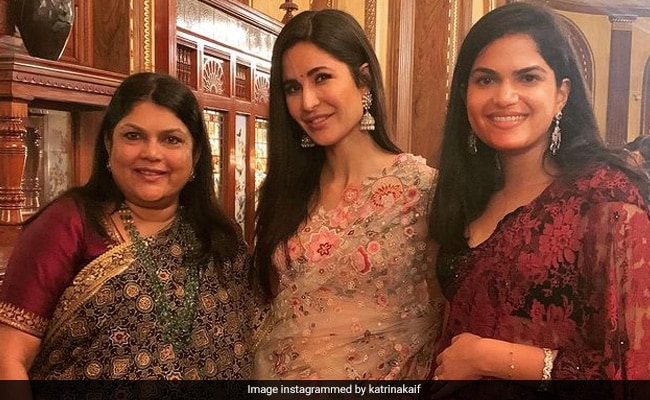 Actor Katrina Kaif, who was at the ceremony for the listing of beauty startup Nykaa's shares last week, shared a photo of herself with the brand's founders, mother-daughter duo Falguni and Adwaita Nayar - today. Katrina is an investor in Nykaa and co-owns the beauty line Kay By Katrina. The caption accompanying the picture of the three women reads, "What an amazing week it's been for my partners Falguni Nayar, her co-founder Adwaita Nayar and all the wonderful people at the Nykaa offices and stores countrywide. A record IPO and listing that proves Indian platforms can be up there with the biggest and best in the world. I'm very proud of you all and couldn't have asked for a better partner on Kay Beauty By Katrina. Here's to many more milestones."

Katrina Kaif was present at the National Stock Exchange when Nykaa's shares were listed last week; shares dropped today after a blockbuster debut on the stock market which made Falguni Nayar India's richest self-made billionaire, according to Bloomberg.

Speaking to NDTV after the listing ceremony, Falguni Nayar said, "We own a brand jointly with Katrina Kaif called Kay Beauty. It's a brand that we started together and she's been very instrumental in helping us build the brand. She's a joint owner and also she's conceptualised the brand and we are building it together. She's a business partner to Nykaa and that's how she was here today." Kay Beauty By Katrina was launched in October 2019. Nykaa is associated with two other Bollywood names other than Katrina Kaif - Alia Bhatt is an investor and Janhvi Kapoor is an ambassador for the brand.

Katrina Kaif, 38, is known for her work in films such as Zindagi Na Milegi Dobara, Namastey London and Ek Tha Tiger. She stars opposite Akshay Kumar in Sooryavanshi, currently playing in theatres and well past the Rs 100 crore mark in ticket collections. Katrina's lineup includes Phone Bhoot and the third film in Salman Khan's Tiger series.