What Kangana Ranaut Said About Zaira Wasim And Taapsee Pannu

"I think any religion should empower you and it should make you independent and confident," Kangana said when asked about Zaira Wasim 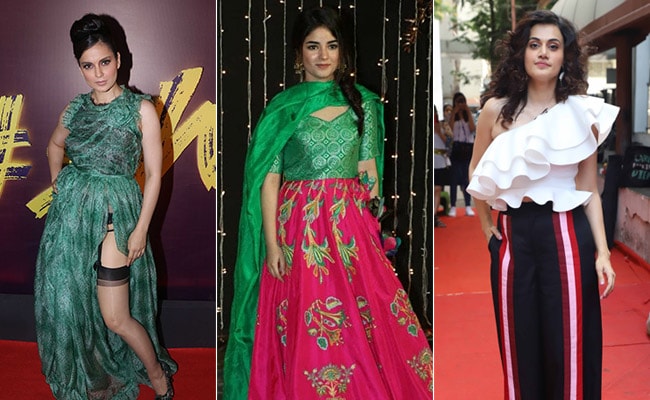 Kangana, Zaira and Taapsee at separate events in Mumbai

Actress Kangana Ranaut, asked to comment on Dangal star Zaira Wasim's decision to quit acting because of her faith, said that religion should 'empower and not disempower you' and 'make you independent and confident.' Kangana was speaking to the press at an event to launch a new song from her film Judgmentall Hai Kya? Weeks ago, 18-year-old Zaira Wasim made headlines after a lengthy social media post in which she announced she was exiting Bollywood because it interfered with her 'imaan' and 'relationship with Allah.' Kangana, who is not on social media, had not offered an opinion thus far although her sister Rangoli Chandel, also Kangana's manager, tweeted similar sentiments.

Speaking at the film event, Kangana Ranaut said, "I think any religion should empower you and it should make you independent and confident. It should make your life fulfilling and if you think that your life is already fulfilling, then there is plenty of work to do around you," reports news agency IANS. "People should try and help their family and friends. There are so many things to do, so we should try and fulfill the environment around us. Essentially, the fundamental requirement of any religion is to empower and not to disempower you."

Kangana Ranaut also defended sister Rangoli Chandel's tweets last week calling actress Taapsee Pannu a 'sasti copy' after she failed to single Kangana out for praise in a tweet on the trailer of Judgmentall Hai Kya? "I am not my sister's spokesperson. It's her fundamental right to express her views. She is not writing anything on anyone else's Twitter wall. If people don't like what she is writing, they shouldn't read her tweets. She is not asking anyone to read her tweets by ringing their door bells, so let her write what she wants to. People post their obscene pictures on Twitter, she is only posting her opinion," Kangana said, IANS reports.

The actress also said that those dishing it out should be prepared to take it as well: "In an interview, Taapsee had said that 'Kangana needs a double filter, when she doesn't get work, she gives excuses of nepotism in the industry'. "There is no harm in making fun of an individual. But one should also be ready to take such harmless digs in return. Why do they become thin-skinned when the other person take a dig at them?"