The first poster of Welcome To New York was released today 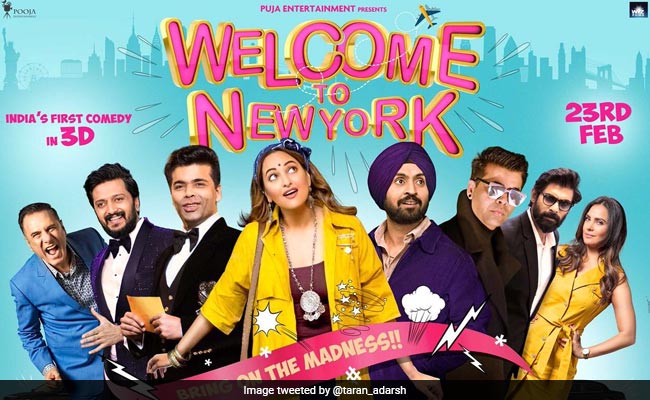 New Delhi: Get ready for some 'madness' because your favourite stars Karan Johar, Sonakshi Sinha and Diljit Dosanjh are all set for Welcome To New York. Yes, that's the title of their new film. On Thursday, the makers of the film revealed the first poster of their upcoming film Welcome To New York. The poster, which looks quite cool, features the lead actors of the film such as Karan Johar (Yes, he will also star in the film), Riteish Deshmukh, Sonakshi Sinha, Boman Irani, Lara Dutta and Rana Daggubati. With the film's first poster, the makers also revealed that Welcome To New York will be India's first comedy in 3D. The film will hit the theatres on February 23rd.

A brilliant way to kickstart the campaign... Karan Johar, Diljit, Sonakshi, Riteish, Lara and Boman 'chat' about their new film and then Salman Khan calls... Also launched is the first look poster of #WelcomeToNewYork [3D], a comedy... Link: https://t.co/QPfOM6ZTxSpic.twitter.com/COogQentAe

Not only the poster, the makers also shared a 'leaked' video chat of the star cast of the film. The video is about a phone call between Diljit and Sonakshi that later turns into a conference call with the other actors joining in, all saying 'meri film hai.' The video also gives us a hint that Salman Khan might also make an appearance in Welcome To New York.

Karan Johar posted the video on Twitter and wrote: "And today, all the online goss is about a leaked conversation from a new film. Welcome To NewYork."

And today, all the online goss is about a leaked conversation from a new film. #WelcomeToNewYorkhttps://t.co/7gzbzzACxd@poojafilms@WizFilmsIN

Welcome To New York is reportedly a story about two youngsters living in India, who are in search of a better life for themselves. An unexpected trip to New York City sets them off on an adventure that changes their lives forever. Produced by Pooja Films and Wiz Films and directed by Chakri Toleti, Welcome To New York will release on Fenruary 23rd.
Comments
welcome to new yorkdiljit dosanjh karan johar sonakshi sinhawelcome to new york poster