"Heaven's brightest shining star! Happy birthday! Love you to the stars and beyond," wrote Riddhima Kapoor 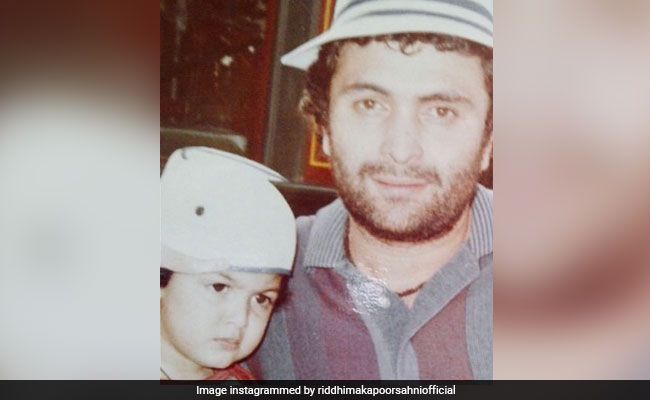 "Hi Papa... We celebrate you every day," wrote Rishi Kapoor's daughter Riddhima Kapoor Sahni on the actor's birth anniversary today. Rishi Kapoor died on April 30 last year after a battle with cancer. Marking Rishi Kapoor's 69th birth anniversary, Riddhima took a trip down memory lane and picked out one of her favourite childhood memories with her father. "We miss you and we love you! Heaven's brightest shining star! Happy birthday! Love you to the stars and beyond. Always... forever Mushk," Riddhima wrote in her emotional note. Riddhima's post was flooded with the red heart icons from the likes of Sonali Bendre, Manish Malhotra, Ayesha Shroff and others.

On Rishi Kapoor's birth anniversary last year, just months after the actor's death, Riddhima poured her heart out in an emotional note, writing: "Papa, they say when you lose someone, you can't live without - your heart will badly break! But I know you are living in this broken heart and will be there forever! I know you are watching over all of us and ensuring that we live by the value system you instilled in us! You gave me the gift of compassion - taught me the value of relationships and made me the person I am today! I miss you each day and will always love you." Riddhima later appeared to have deleted the post.

After Rishi Kapoor's death in April last year, Riddhima couldn't make it to the actor's funeral in time as the country was in lockdown mode. She watched the funeral on FaceTime while travelling to Mumbai from Delhi. Riddhima Kapoor, who lives in Delhi with her family, drove from Delhi to Mumbai to be with her mother Neetu Kapoor. She later attended the prayer meets.