Parineeti Chopra Had This Much Fun Filming Uunchai 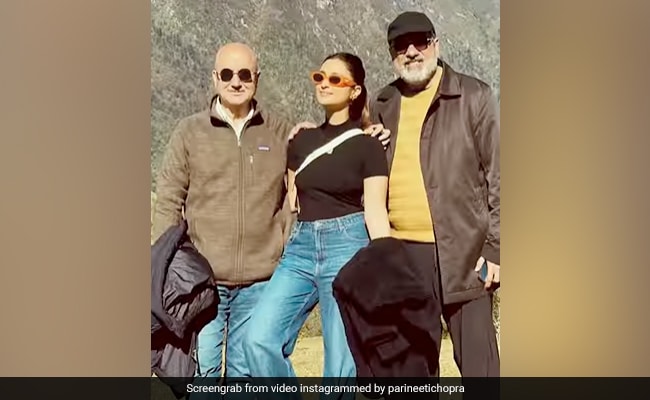 Parineeti Chopra is on cloud nine thanks to the success of Uunchai. The actress, on Wednesday, chose to share her joy with fans by posting a special video on Instagram. The video with the hashtag “Memories of Uunchai” features a montage of moments from the sets of the film. It starts with the cast of the film including stalwarts like Amitabh Bachchan, Anupam Kher, and Boman Irani hiking through the mountains. This is followed by images of Parineeti with her co-stars in the lap of nature. In the caption, she said, “Trek, shoot, meditate, repeat.”

Replying to the post, actress Maria Gorettiz gushed, “What an amazing way to live.”

Previously, Parineeti Chopra had shared another picture from the sets of the film. In it, she is seen sitting by a river surrounded by mountains. In the caption, Parineeti said, “In between takes …#Uunchai.”

Another post contains images and videos of Parineeti Chopra and her co-stars having fun on set. Also seen in a photo is director Sooraj Barjatya. “The moments that made Uunchai. This shoot was a once-in-a-lifetime blessing,” Parineeti wrote in the caption.

Sharing the trailer of the film, Parineeti Chopra described the feeling as one that can't be expressed in words. “An energy that will stay with me for a lifetime,” she wrote about the project.

Directed by Sooraj Barjatya and produced by Rajshri Productions, Uunchai also stars Neena Gupta, Sarika and Danny Denzongpa. The film was released on November 11 and follows three aged friends who embark on a trek to the Everest Base Camp to fulfil a late friend's last wish.

On the work front, Parineeti Chopra will be next seen in Capsule Gill.