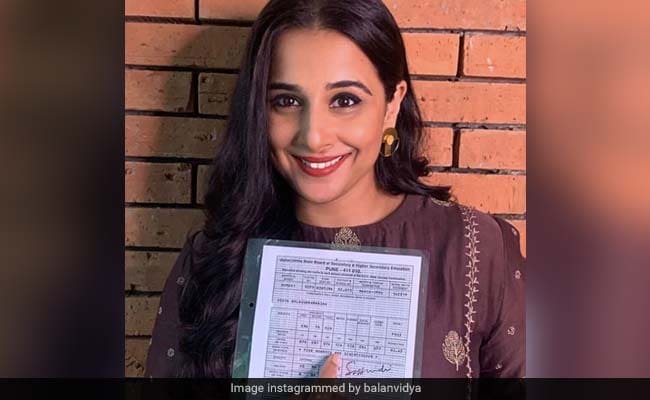 Vidya Balan occupied a spot on the list of trends on Tuesday, courtesy her class 10 marksheet. The actress, while promoting her recently-released film Shakuntala Devi on social media, shared glimpses of her class 10 report card and particularly showed the marks she scored in Mathematics in her board exams. Vidya plays the role of mathematical wizard Shakuntala Devi in the film. The second picture that Vidya shared shows that she got 126 marks in Maths out of 150. The actress scored 82.42 percent in the class 10 board examination in 1994. Sharing the photos, Vidya wrote that she wasn't a "genius" like Shakuntala Devi but was a "good" student. "I wasn't a 'genius' but I was definitely good. Wow, not bad haan?" she captioned the post and then asked her fans to reveal their Mathematics marks in the comments section.

Within minutes, several users revealed how much they scored in Maths in class 10. Some even went on to share their class 12 results.

I wasn't a 'genius' but I was definitely good :P Wow, not bad haan? Tell me what your maths marks were in the comments below and watch #ShakuntalaDeviOnPrime NOW, @primevideoin

Vidya Balan's latest film is based on the life of Shakuntala Devi, whose genius was first discovered at the age of 5, when she solved a math problem for 18-year-old students. Shakuntala Devi even earned a place in the 1982 edition of The Guinness Book of World Records for 13-digit multiplication in 28 seconds.

Vidya Balan will next be seen in Amit Masurkar's Sherni.