In Ludo, Pearle Maaney plays a Malayali nurse whose fortune changes overnight after a chance encounter. 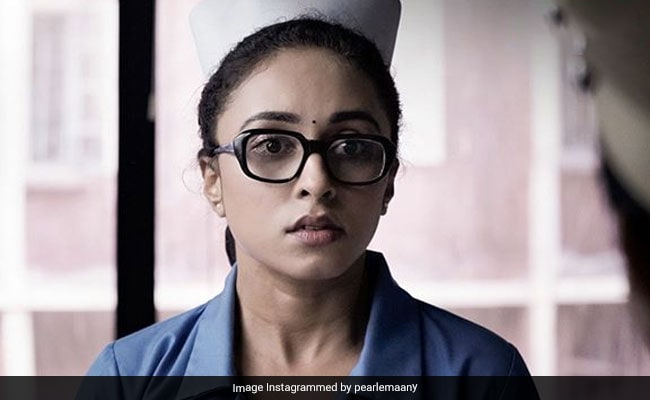 Malayalam actor Pearle Maaney says she wasn't sure whether director Anurag Basu was happy with her performance throughout the first schedule of her maiden Hindi film, Ludo.

Maaney, popular for hosting TV shows and featuring in Tamil, Telugu and Malayalam movies, said she was surprised when Basu approached her for the dark crime comedy.

In an interview with PTI over Zoom call, Maaney said the fact that she was chosen for the project without any audition made her doubtful about the Barfi director being aware about her work.

"I was unsure if this was really happening till the first schedule was over. Even during the first schedule, I thought if he's not happy with my performance he might change me because I never had an audition with him."

Maaney said she often wondered what convinced Basu that she could pull off her role, which barely has any dialogues, as the director perhaps hadn't even seen her South films.

"I had this question constantly, because I hadn't performed before, had no background in Bollywood. I couldn't understand why would he cast me among all the big actors. But he had this strong conviction," the actor added.

In the film, Maaney plays a Malayali nurse whose fortune changes overnight after a chance encounter.

Maaney said she realised later that she was cast to reflect authenticity on-screen and is glad that a Hindi-speaking actor was not made to play a South Indian.

In the film, Maaney's track, co-starring Saraf, runs parallel to the other three stories and builds up to the inevitable face-off when all the four worlds collide with each other.

She said she marvelled the way Basu helmed the film. With bare minimum story brief, Maaney said she saw the director build the entire Ludo world like magic.

"Once I saw how he was working with everyone, that he likes to experiment on set, I realised he had a lot going on in his head. To bring together four different stories is not easy. It's his bravery to think of a story like Ludo and take up this incredible challenge.

"It's not even a movie where one can delegate work to assistant directors. There were times when even the ADs (assistant directors) were clueless. It was all in his head and it was wonderful how he pulled it off."

Much like the rest of the cast, Maaney said she knew nothing about the film when she came on board.

The actor said Basu's secrecy sometimes extended even till the time an actor was about to give his or her shot.

"When the shot would get ready and we'd ask him what to do, even then he'd say 'go in front of the camera, I'll tell you.' That's how we worked. He wouldn't give us a tough scene without briefing us but if it was a light scene or wanted some subtle expression, he wouldn't give to many details."

She said the director was so precise in what he wanted that he would even show the actors the exact expression he needed and the cast would "have to mirror him sometimes.

"That's how beautifully he knew his characters. All the colours were within him. He was rolling the dice, we were just the players being guided by him," she added.

Ludo is scheduled to be released on Netflix on November 12.