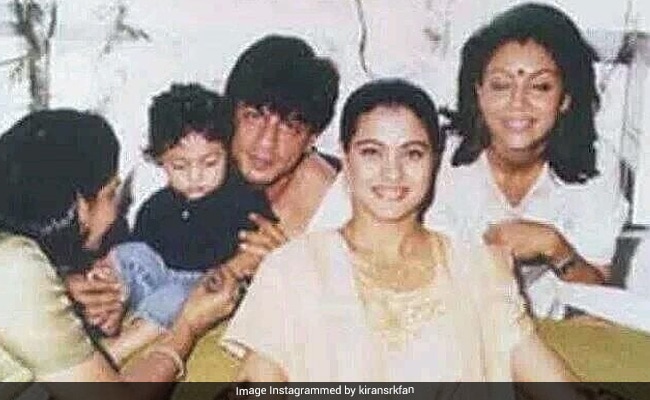 We just chanced upon a million-dollar photograph from Kajol's mehndi ceremony and let's just say that it is pure gold. Why, you ask? Well, the aforementioned picture also features Kajol's friend and co-star Shah Rukh Khan along with his wife and interior decorator Gauri Khan. Oh, we also spotted little Aryan Khan in his father's arms. Kajol, dressed in a pastel outfit, could be seen happily posing for the camera. The picture, which has been curated by several fan clubs dedicated to the actors, is going insanely viral and TBH, we are not surprised at all.

Without much ado, check out the picture here:

Kajol and Shah Rukh Khan have co-starred in several films. Their 1995 film Dilwale Dulhania Le Jayenge, has been running in Mumbai's Maratha Mandir theatre for over two decades now. The duo also shared screen space in the 1993 film Baazigar. They also co-starred in Kuch Kuch Hota Hai, Kabhi Khushi Kabhie Gham..., My Name Is Khan and they were last seen together in Rohit Shetty's Dilwale.

Kajol married Aay Devgn as per Maharashtrian traditions in 1999. They co-starred in films such as Ishq, Pyaar Toh Hona Hi Tha and Dil Kya Kare. They are parents to daughter Nysa, 17, who studies in Singapore, and son Yug, who stays with his parents in Mumbai.

Shah Rukh Khan and Gauri got married in 1991. The star couple are parents to Aryan, (their eldest child), Suhana and 6-year-old AbRam. Both Aryan and Suhana are pursuing their higher studies abroad while AbRam stays with his parents in Mumbai.