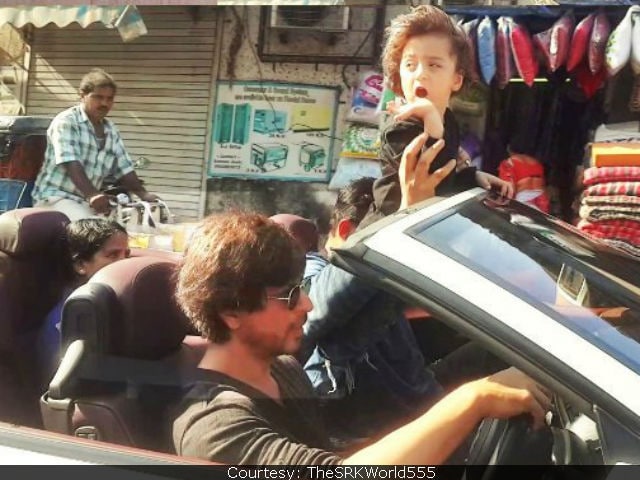 Shah Rukh Khan and AbRam on their drive (Courtesy: TheSRKWorld555)

New Delhi: AbRam's wish is Shah Rukh Khan's command. After the late night walk down Juhu beach last week, SRK, 51, took his youngest son, who is three and utterly adorable, for a long drive in a convertible on the streets of Mumbai. SRK drove and AbRam can be seen totally enjoying Mumbai's hawa as he rode shotgun. SRK fans were frantic to see father and son and many chased the car in the hope of a picture-perfect frame. Meanwhile, a carefree AbRam waved merrily at onlookers. Video of the outing have gone viral (because the Internet just adores AbRam Khan). AbRam is the youngest of SRK and Gauri's children - his elder siblings are Aryan, 19 and Suhana, 16. This is SRK and AbRam third public outing within a month. Just after the release of Raees, the 51-year-old actor went to Amristar's Golden Temple with AbRam and then there was last week's beachside stroll.

Earlier, cutie-pie AbRam crashed an interview his father was giving, complaining of a 'broken' finger. AbRam, who will celebrate his fourth birthday in May, interrupted the interview to show SRK his injured thumb and have his dad kiss it better. Unsurprisingly, that video went viral as well.

We got to witness some very adorable moments between the doting dad SRK & little AbRam Khan during FB live chat with @TheViralFever! pic.twitter.com/BxB3LRQ3FR

Promoted
Listen to the latest songs, only on JioSaavn.com
AbRam is Shah Rukh Khan's constant companion and often accompanies the actor on shoots, trips and to cricket matches. When Shah Rukh Khan boarded the August Kranti Express from Mumbai to promote Raees via rail last month, he revealed that he was missing AbRam. "I wish I had brought AbRam along with me. Because he loves to travel," SRK told NDTV.