For her wedding, Prachi wore a lehenga designed by Sahil Kocchar 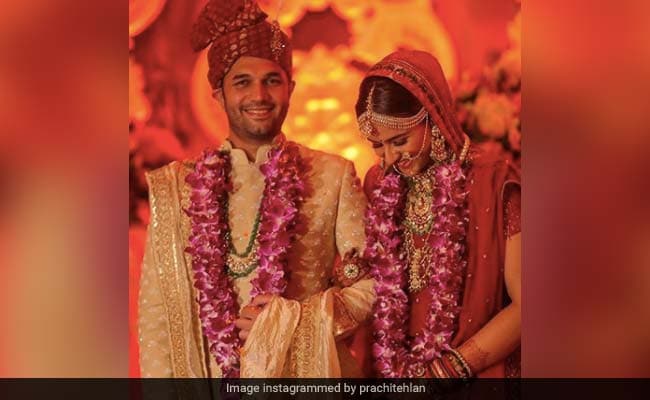 TV actress Prachi Tehlan, who is best-known for starring in the show Diya Aur Baati Hum, married Rohit Saroha in New Delhi recently. On Sunday night, she shared the pictures from her wedding and they have been trending on social media big time. For her big day, Prachi wore a red lehenga from the shelves of designer Sahil Kocchar. She completed her look with heavy jewelry, designed by Archana Aggarwal. Her husband Rohit Saroh complemented her in a cream sherwani. The wedding was reportedly attended by a few family members and close friends in New Delhi. On her Instagram profile, the actress shared multiple pictures from her big day.

Check out the pictures from Prachi and Rohit's wedding here:

"Mr and Mrs Saroha," read the caption on one of Prachi Tehlan's post:

The Diya Aur Baati Hum actress also shared pictures from her mehndi ceremony on her Instagram profile. She picked an emerald green outfit from Drape Story.

Keeping up with the theme, Prachi opted for a ruffled yellow lehenga for the haldi ceremony. Here are the pictures from the ceremony:

Before stepping into the entertainment industry, Prachi Tehlan was the captain of the Indian Netball Team, which represented India in the 2010 Commonwealth Games held in India. She made her acting debut with the TV show Diya Aur Baati Hum in 2016. She also starred in the TV show Ikyawann. Prachi has also been a part of Punjabi and Malayalam films such as Arjan, Bailaras and Mamangam.