Pooja Singh shared a couple of pictures from her wedding ceremonies 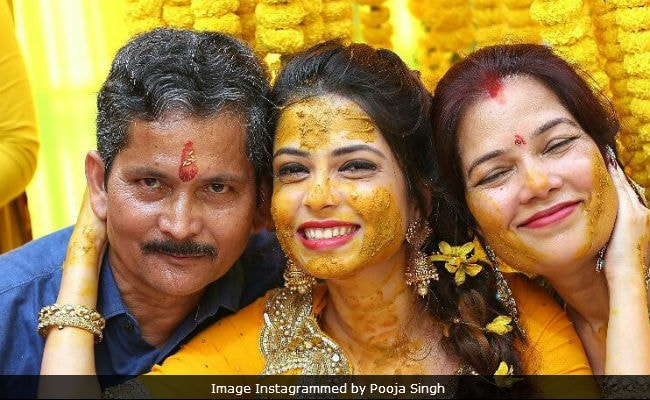 New Delhi: Television actress Pooja Singh, known for TV shows like Diya Aur Baati Hum and Dil Se Dil Tak finally got married to her boyfriend Kapil Chattani. The couple had a close-knit shaadi in Jamshedpur (which is Pooja's hometown) comprising close friends and family members. Pooja and Kapil met through a close friend in Pune and were dating for a while now. Pooja shared a couple of pretty pictures from her haldi ceremony in which she can be seen dressed in a yellow saree and phool gehna. In one of the pictures, shared by Pooja she is all smiles and posing with her parents.

Pooja's picture from her kanyadaan, which surely give you the feels:

No matter how far we come, our parents are always in us.. #kanyadaan #parents #selflesslove #blessings #marriage

Thanks to Pooja's best friends, who shared a couple of beautiful pictures from the wedding, and elated the fans.

This one is from Pooja's pool side sangeet ceremony:

Did the pictures give you shaadi vibes?

Promoted
Listen to the latest songs, only on JioSaavn.com
Earlier it was reported by Times of India that the Pooja will marry Kapil on December 5 in Jamshedpur and Pooja also said that she felt she is a perfect TV bahu material. It is also reported that Pooja will throw a reception party for her friends and colleagues soon.