The two were seen grooving to lines from the 70's song on the sets of the reality TV show Dance Deewane. 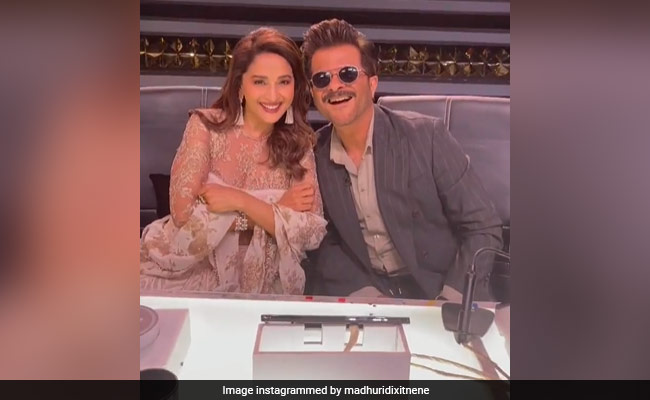 Where are the good old days? Right on the sets of the reality TV show Dance Deewane 3. Right at the seats where Madhuri Dixit and Anil Kapoor are sitting. Right when the song Jai Jai Shiv Shankar starts to play. Retro days are back and, that too, with a celebrity splash. Madhuri Dixit recently posted a video on Instagram and it is taking her fans by storm. Did we just see a glimpse of the glamour queen stepping into retro vibes, that too with the ever-young Anil Kapoor by her side? Yes, we did. The actors have featured together in various hit films and are known for their peppy nature that denies to weather with age. We get to see just that in this video.

Both Madhuri Dixit and Anil Kapoor are seen on their judges' chairs on the sets of the reality show. Madhuri Dixit is glammed up in a white glimmering lehenga while Anil is suited and booted with a pair of black round shades on his eyes. The video starts with a later verse of the song Jai Jai Shiv Shankar from the 1974 film Aap Ki Kasam. Anil Kapoor starts lip-syncing with the male voice. Then, Madhuri Dixit takes it up and finishes the couplet. Meanwhile, both act out the lines with animated gestures. Madhuri captioned it, “Retro vibe.” Check out the video.

Far from missing out on the fun on the DD3 sets, Madhuri Dixit is often seen as the focal point of it. We once saw her dancing with actors Jackie Shroff and Suniel Shetty on the stage. Watch the video she shared.

She was also spotted with actress Raveena Tandon as the two posed for fun Boomerangs.

Madhuri Dixit had also shared a snippet from the show where behind-the-scenes clips were being shown from her work in the film Khalnayak.

Madhuri never left the musings of Bollywood's past behind her as we continue to swoon at her charm to date.

Malaika And Amrita Arora Coming Together For Series Arora Sisters?