Viral: Is This Kangana Ranaut's First Look From Rani Laxmibai? 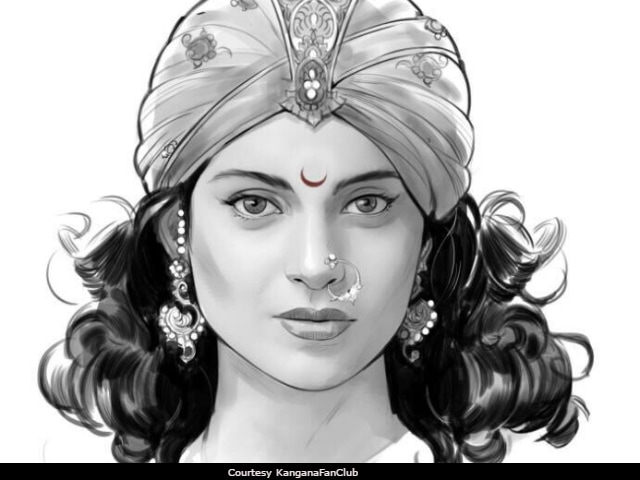 New Delhi: This could possibly be the first look of Kangana Ranaut as Rani Laxmibai. A sketch of the actress as Rani Laxmibai, the character she plays in Manikarnika, an upcoming and much talked about historic biopic, has been shared on social media by fan clubs of the actress. The fan club who operates under the moniker 'Team Kangana Ranaut,' has also revealed the sketch to be a conceptualised version of the look of the actress in the film. "The conceptualises sketch. We got hands on from the workshop session of Manikarnika - The Queen of Jhansi," wrote the fan club when sharing the picture produced below. Manikarnika - The Queen Of Jhansi will reportedly go on floors in May or June.

The conceptualise sketch. We got hands on from the workshop session of Manikarnika - The Queen of Jhansi. Shoot begins in the 1 week of June pic.twitter.com/oLTKaCnZpQ

Meanwhile, the Gangster actress was expected to shoot for the first poster of the film on her birthday last month, reported mid-day. The film was earlier reported to be helmed by Mangal Pandey director Ketan Mehta but now, according to mid-day, the film will have a revamped team, including a new director. "The new film will be helmed by a fresh team. A top studio, too, has agreed to back the venture, which is envisioned as an action-packed, feisty film. It is the biopic of an ordinary girl, who when faced with tough times, discovered the warrior in her. The film will go on floors in mid-May," mid-day quoted a source as saying.

Kangana Ranaut and the director reportedly parted ways, as far as the film is concerned, for difference in opinion over which language the film should be made. "The actress and the filmmaker couldn't find common ground on the language factor, leaving the project in a limbo. Ketan was insistent that his movie be made in English for an international audience, like Gurinder Chadha's The Viceroy House, but those working on the film felt it won't go with the ethos of the story," mid-day added the source as saying.

KV Vijayendra Prasad, the celebrated screenwriter who has worked for films like Baahubali and Bajrangi Bhaijaan, is currently working on the script of Manikarnika - The Queen Of Jhansi.

Promoted
Listen to the latest songs, only on JioSaavn.com
The period drama is based on Jhansi's celebrated historic ruler Rani Laxmibai, who also had a pivotal role in the Indian Rebellion of 1857. Meanwhile, Kangana Ranaut has trained extensively in horse-riding and sword-fighting and is also expected to undergo noticeable physical transformation for the film.

Manikarnika - The Queen Of Jhansi will be Kangana Ranaut's first film after war drama Rangoon, in which she played an actress.

It's A Boy For Singer Neeti Mohan And Nihaar Pandya