"The most awaited day in my life," wrote Khatija Rahman 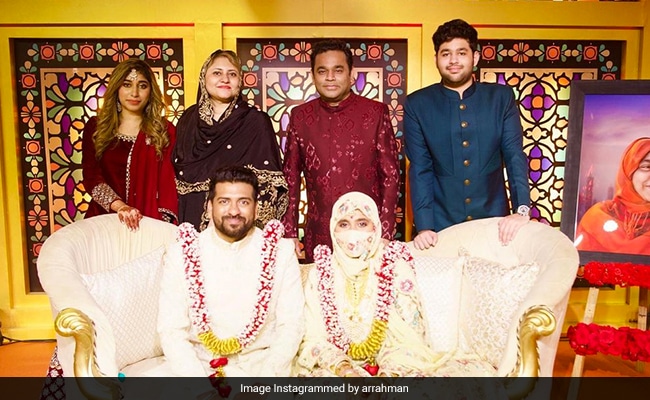 AR Rahman's daughter Khatija Rahman got married to her fiance, audio engineer Riyasdeen Shaik Mohamed. The Grammy Award winning composer shared a picture from Khatija and Riyasdeen's wedding on his Instagram profile and he wrote: "May the Almighty bless the couple...Thanking you in advance for your good wishes and love." The family photo from the wedding ceremony also has a portrait of AR Rahman's late mother placed on the stage. Khatija shared a picture from her wedding on Instagram and she wrote: "The most awaited day in my life. Married to my man Riyasdeen. Costume conceptualized and styled by Shruti Agarwal, costume Assistant- Kriti Baid."

This is what AR Rahman posted:

Khatija and Riyasdeen got engaged in December last year. She announced it with a post that read: "With the blessings of the Almighty I'm happy to announce to you all my engagement with Riyasdeen Shaik Mohamed, an aspiring entrepreneur and a wizkid audio engineer. The engagement happened on 29th December, my birthday in the presence of close family and loved ones."

Khatija, just like her father, is also also a singer-musician. She has sung a few tracks, including Rock a Bye Baby from Mimi.

AR Rahman's long list of awards includes six National Awards and several Filmfare Awards from across Bollywood and the South film industry. He was honoured with the Padma Shri in 2000 and Padma Bhushan in 2010 for his contribution to Indian music and cinema. AR Rahman's Grammy wins were two more trophies added to his awards legacy, headlined by the Academy Awards - he won two Oscars for Slumdog Millionaire in 2009.

Ishq Bezubaan, Sung By Asees Kaur And Harshdeep, Is All About Love