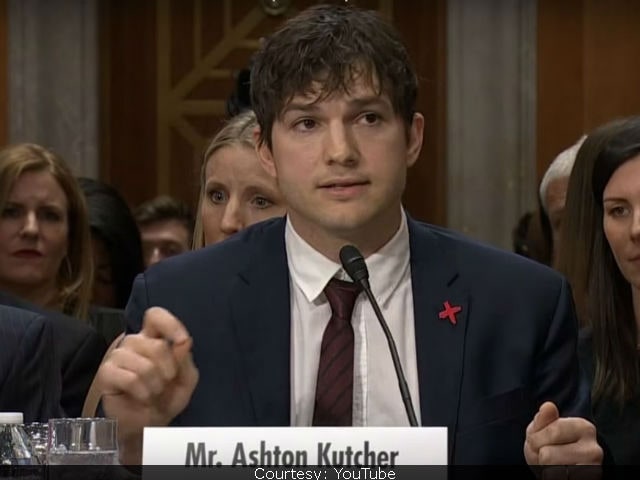 New Delhi: Actor Ashton Kutcher's emotional speech against human slavery swiftly went viral on Wednesday. The 39-year-old actor was speaking before the US Senate Foreign Relations Committee. He spoke about witnessing survivors of human trafficking in Russia, India, Mexico, New York and New Jersey. A teary-eyed Ashton said, "I've seen things that no person should ever see. I've seen video content of a child that is the same age as mine being raped by an American man. She thought she was engaging in play." Ashton Kutcher, best known for his work on the sitcom That 70s Show and films like What Happens In Vegas, has two children with wife Mila Kunis.

Sharing an article on his speech, Ashton wrote on Twitter, "It's not just my job, it's my duty to the global community. Everyone has the right to pursue happiness."


Ashton, who co-founded international anti-human-trafficking organisation Thorn, also listed several solutions to end human trafficking through adaptable technology. In his speech, he said that while technology can be used to enable slavery, it can also be used to disable it.

It's not just my job, it's my duty to the global community. Everyone has the right to pursue happiness. https://t.co/kMJK1SyN6R

Ashton Kutcher said that his company has found a tool called Spotlight which can investigate human trafficking. "It's working. In six months, with 25% of our users reporting, we've identified over 6,000 trafficking victims, 2,000 of which are minors," said Ashton.

He also added, "The right to pursue happiness is bestowed upon all of us and every citizen should make sure we help each other in it. But, the right to happiness is stripped for many, abused and taken by force for the momentary happiness of others." Ashton explained that his day job as a co-founder of the company is to build software to stop human trafficking and his other job is to parent two children. He said, "I take that job very seriously for it is my responsibility to give them all the rights to happiness."

Promoted
Listen to the latest songs, only on JioSaavn.com
Senator Bob Corker thanked Ashton Kutcher for the work he and his company Thorn have done to rescue survivors of trafficking. In a tweet, he wrote: "Thankful for Ashton Kutcher and the work @thorn is doing to rescue trafficking victims. It was great to have him on the Hill today."

Thankful for Ashton Kutcher and the work @thorn is doing to rescue trafficking victims. It was great to have him on the Hill today. pic.twitter.com/M5FR4m5HNa

On February 12, Ashton Kutcher announced the birth of his second child, a baby boy with wife Mila Kunis. The couple already have a two-year-old daughter, Wyatt. Mila and Ashton got engaged in February 2014 after a two-year relationship and married in July 2015.