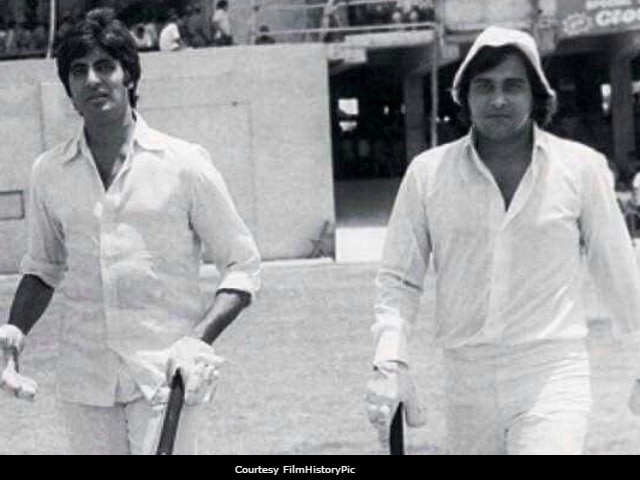 New Delhi: No, it's not throwback Thursday but we struck gold with an old black-and-white photograph of Amitabh Bachchan and Vinod Khanna, who is currently recuperating from severe dehydration at a Mumbai hospital. On Tuesday, the Internet woke up to this photograph, which is quickly going viral. Big B and Mr Khanna can be seen walking along a cricket pitch, determined to kick start a blockbuster match. The Amar Akbar Anthony co-stars were reportedly photographed ahead of their inaugural stint at a charity cricket match. Amitabh Bachchan, 74, and Vinod Khanna, 70, famously starred in several cult films in the seventies. Apart from Amar Akbar Anthony, the superstar duo have shared screen space in 1975's Zameer, 1976's Hera Pheri, 1977's Parvarish and Khoon Pasine and 1978's Muqaddar Ka Sikander.

Meanwhile, Vinod Khanna, who was hospitalised on March 31, is better and recovering said his son Rahul. The veteran actor is responding positively to treatment, assured hospital authorities.

Social media have continued to delight us with old photographs of veteran Bollywood celebrities, some of which have been curated here. You're welcome.

Only days back, Neetu Kapoor posted a picture, in which her husband and Big B's second co-star of Amar Akbar Anthony, Rishi Kapoor, can be seen "lazing" around.

In another blast from the past, Rishi Kapoor posted a picture with his industry colleagues - Rajesh Khanna, Vinod Khanna, Jeetendra, Mithun Chakraborty, Satish Shah and Rakesh Roshan.

........and all of them rivals but friends! Function to raise funds for the film industry workers,1985,I think! pic.twitter.com/5ZXJ1BxDtU

Promoted
Listen to the latest songs, only on JioSaavn.com
In March last year, Big B himself found discovered and shared a picture with late actress Jennifer Kapoor. Jennifer was married to Shashi Kapoor, who produced and co-starred with her in films like Junoon.