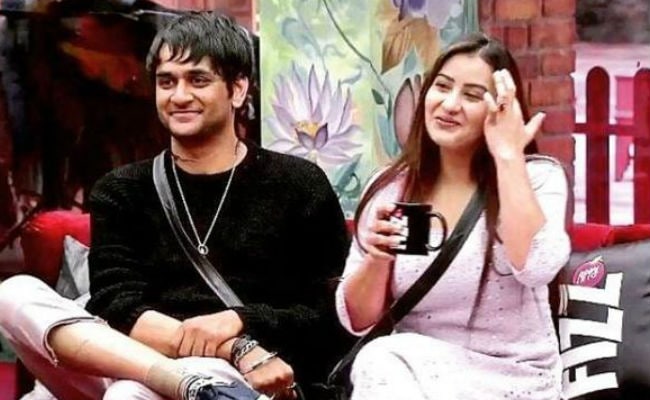 A file photo of Shilpa Shinde and Vikas Gupta from Bigg Boss 11.

Shilpa Shinde resurrected an old battle with Bhabi Ji Ghar Par Hai producer Vikas Gupta, with whom she also competed in Bigg Boss 11. Shilpa recently accused Vikas Gupta of scheming against her but the television producer denied allegations levelled against him and told media persons that the former Bhabi Ji Ghar Par Hai actress should focus on her career, reports news agency IANS. "I don't know why Shilpa is doing all this... She should focus on her work. She is really a good actress. It is not necessary that whoever comes to you and say things, are true. We wrapped up Bigg Boss season one-and-a-half years ago. So, she should focus towards her work because whatever she is doing every other day is not cool," he was quoted as saying.

Over the weekend, Shilpa Shinde said Vikas Gupta was the "mafia of the television industry" and accused him of orchestrating a defamation case against her in order to stop her from participating in Bigg Boss 11, which she won. In a separate tweet, she alleged that Vikas Gupta's influence was so strong that even Salman Khan (who hosts Bigg Boss) had to say that Vikas was not involved on Shilpa's ouster from Bhabi Ji Ghar Par Hai. "All I can say is that throwing names like Salman Khan, Viacom 18 (the production house of Bigg Boss) and Colors (channel) for some stupidity is not a cool thing to do," Vikas said.

Your love and support as fans is in literal sense #onyourface for them.. Thanks a ton to all of you pic.twitter.com/Q8XPt4IoB4

Earlier on Twitter, Vikas had said: "Please think before you tweet Shilpa ji. You told me never to trust these two (co-contestants Priyank Sharma and Arshi Khan) completely even after Bigg Boss and you got influenced to this level that you are ending up damaging all that you have built up after such a long time. At least care about the people who love you."

Please think before you tweet ShilpaJi You told me never to trust these two completely even after bigboss vikas Ji and you got influenced to this level that you are ending up damaging all that you have built up after such a long time. Atleast care about the people who love you https://t.co/W3YhFblcyv

In 2016, Shilpa Shinde accused the makers of Bhabi Ji Ghar Par Hai of "mentally torturing" her. On Bigg Boss 11, after she came face-to-face with Vikas Gupta, she had accused him of being responsible for her sacking from the show. She said that Vikas threatened her she'll never get another show on the small screen.

After winning Bigg Boss 11, Shilpa Shinde had said she would not want to feature in television shows. Earlier this year, she appeared in a special episode of Entertainment Ki Raat and also co-hosted a special web-series, titled Jio Dhan Dhana Dhan, with Sunil Grover.