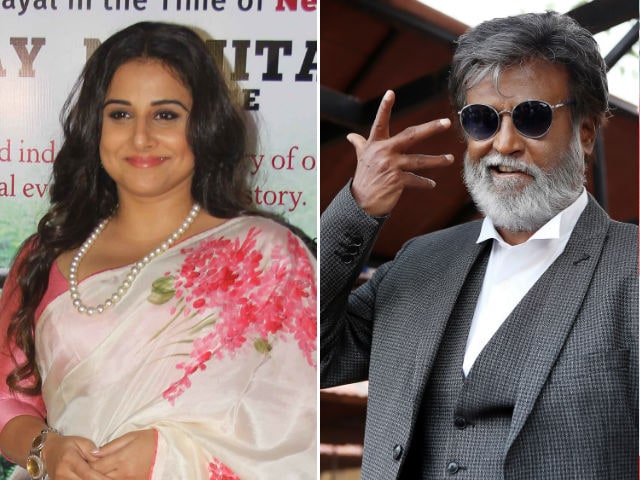 Vidya Balan (L) in Mumbai. Rajinikanth (R) in a still from Kabali

New Delhi: Actress Vidya Balan was asked about her rumoured upcoming project with Tamil superstar Rajinikanth and the Kahaani actress kept the ambiguity alive by replying: "We will know in a while," reports news agency IANS. The 38-year-old actress interacted with journalists at an event to launch a book in Mumbai. The makers of Rajinikanth's Kabali reportedly approached Vidya Balan for a role in the film's spin-off. Kabali, directed by Pa Ranjith, featured Rajinikanth as a Malaysia-based don, who looked after the welfare of the Indian residents in Malaysia. Radhika Apte played the role of his wife while Dhansika played the role of his daughter Yogita. This will be Vidya Balan's first Tamil film.

Last year, actor Dhanush announced on Twitter that he will produce a film starring his father-in-law Rajiniknath and it will be written and directed by Pa Ranjith. Ever since then speculations are rife that the film will be connected to Kabali, which released in July, last year.

I'm so proud and honoured to announce our production's next film #WunderbarFilmspic.twitter.com/7T3tmy4Cre

Dhanush also said that the project will start after Shankar's 2.0 in which Rajinikanth reprises the roles of scientist Dr Vaseegaran and Robot Chitti. The film is a sequel to 2010 film Enthiran and also stars Akshay Kumar as principal villain and will hit the screens around Diwali this year.

Promoted
Listen to the latest songs, only on JioSaavn.com
Meanwhile, Vidya Balan was last seen in Kahaani 2: Durga Rani Singh co-starring Arjun Rampal. The film did not enjoy the same success as its predecessor Kahaani which released in 2012. Vidya Balan's upcoming film is Begum Jaan, a story of a courtesan set during the partition of India. The film is an adaptation of Bengali film Rajkahini and is directed by Srijit Mukherji. She has also signed up for Suresh Triveni's rom com Tumhari Sulu.

When Jackie Shroff, Playing A Villain, Became The Hero For Real