Fans of Sidharth Shukla shared a longer version of the video clip, claiming that the viral clip is only a cropped out portion 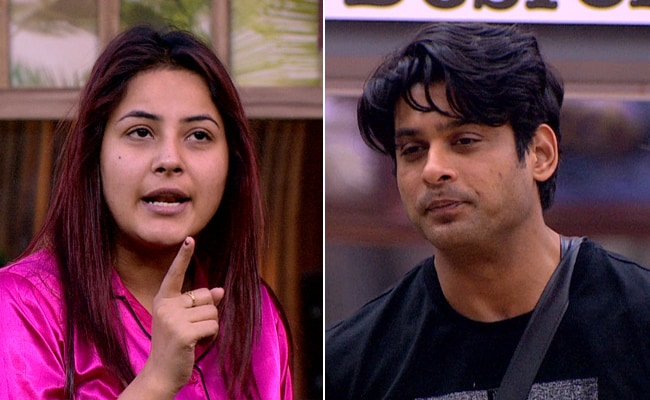 Sidharth Shukla and Shenaaz Gill in still from Bigg Boss 13

A new day in the Bigg Boss 13 house means a new controversy. On Tuesday's episode of Bigg Boss 13, Sidharth Shukla and Shenaaz Gill, who are frenemies in the house, had a fight like any other day, which, however, escalated to another level. During Tuesday's episode, Shenaaz snapped at Sidharth Shukla for wanting to pass her the mic, which turned into an altercation of sorts and lead to Sidharth Shukla teasing Shenaaz about being jealous over co-contestant Mahira Sharma. Meanwhile, a video clip, featuring only a glimpse of the fight, went crazy viral on social media. The video clip features Sidharth Shukla threatening Shenaaz Gill about not repeating the way she behaved during the fight ever again. It appears that Sidharth Shukla had Shenhaaz Gill pinned down to the floor while threatening her.

Criticism poured in on Twitter after the video from Tuesday's episode was shared on social media, with netizens slamming the show for promoting violence. Actress Shruti Seth is one of those, who tweeted about the video clip and called out the channel: "What the hell is this? Why are we promoting this kind of barbaric violence in the name of entertainment? This man needs professional help." Another user tweeted: "This man should have been evicted the first time he initiated violence against a co-contestant" while another user wrote: "This is absolutely sick and disturbing."

This man should have been evicted the first time he initiated violence against a co-contestant. But rather than showing him the door, @ColorsTV projected his violence as a mere reaction to the "provocation" by other housemates. This is what you get by enabling an abusiver. Shame. https://t.co/tjfOfpB3u5

What the hell being shown on National Television in the name of entertainment. Imagine what kind of impact of this will be on young innocent minds. Isn't it harassment..... ?!!
Ban this programme @BiggBoss. https://t.co/XwbjGIQeR7

This violent man shouldn't be allowed to be on the show.
This is absolutely sick n disturbing#BB13#BiggBoss13pic.twitter.com/Kw3qI9ZHQl

Meanwhile, fans of Sidharth Shukla shared a longer version of the video clip, claiming that the viral clip is only a cropped out portion to malign the actor's image:

Here's the Full Clip, to defame #SidharthShukla People Edit the Clip to malign someone's image and some dump people start commenting without even trying to know what is the fact, just for the sake of getting Fame and Media Attention, @SethShruti@MasalaBai@KiranManralpic.twitter.com/jXU75dBSGK

Bigg Boss 13 is currently in its final leg. During his stay in the house, Sidharth Shukla has often been criticised for his anger management issues and constant fights with Rashami Desai, Arhaan Khan and other fellow contestants.